Amazing, Scott Walker's approval rating actually went up in the latest Marquette Poll, even after the bad news about jobs came out in Wisconsin.

Walker Outsources Work: He's not stopping the jobs from leaving, that's for sure. It looks like his CEO friend forgot to mention their plans to outsource:

Citizen Action of Wisconsin: Data kept by the U.S. Department of Labor shows that at least 11,331 Wisconsin workers have had their jobs outsourced to other countries the last five years since Governor Walker’s scandal ridden jobs agency, the Wisconsin Economic Development Corporation (WEDC), was launched July 1, 2011. This is a very low end estimate … It does not account for outsourcing to other states, or downsizing where it is not possible to prove the jobs landed in a foreign country or were impacted by global trade deals.

Walker is hoping for a Renaissance of Manufacturing with ACT 10 and right-to-work supply of Low Wage Workers: No, Democrats weren't just making this stuff up. In fact, here's Trump from 2011 on lowering wages with RTW:

Real wages (adjusted for inflation) are going down for manufacturing workers in every Wisconsin metro area. On average, annual wages declined $1,430 between 2010 and 2015 - Source: Bureau of Labor Statistics.

This data also directly challenges Governor Walker’s constant assertion that a co-called “skills gap” is the cause of Wisconsin’s economic woes. If manufacturers were really having problems finding skilled manufacturing workers, they would be raising wages, not lowering them.

The state also lead the way in the largest drop in the middle class of all states. 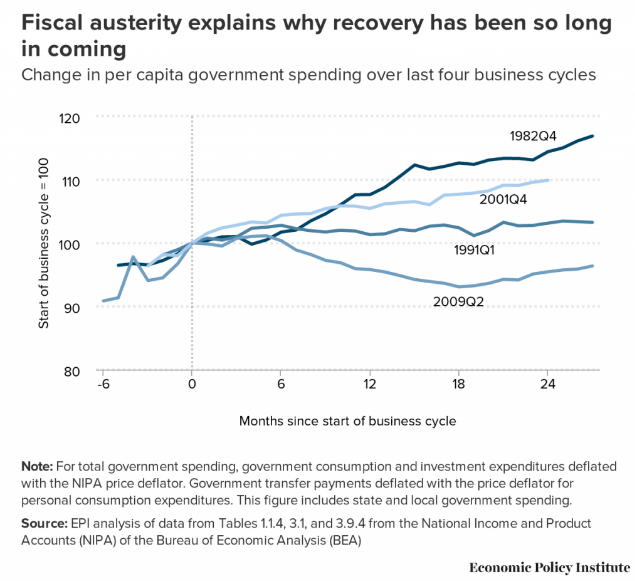 A little-noticed report from the Economic Policy Institute earlier this month should have been national news … The recovery since 2009 has been historically slow, and the disappointing pace can be explained entirely by the fiscal austerity imposed by Republicans in Congress.

Since the Stimulus ended, the kind of good jobs that come from construction or public investment and are readily available to Americans who don’t have college degrees have dried up — purposely. They’ve done it to increase economic anxiety, which they know will increase resentment of all sorts, including the racial resentment that has driven much of the resistance to Obama.