Republicans rule by pure ideological theory, thinking whatever does go wrong can be explained by blaming outside liberal policies. And there will never come a time when Republicans won’t find some way to find, even create, something that sounds horribly liberal.

It works wonders for Republicans; they made failure and hard times a plus that gets them votes. That oddly makes their constituents end up resenting the actual victims of free market GOP policy.

Scott Walker even said the sharp bitter public divide over policy makes us better and stronger. He wasn’t kidding if you're a Republican trolling for votes and a lifetime in office.

Act 10 and right-to-work promises to feed the resentment and detachment people feel over government policy, keeping wages low or lower, all the while helping Republicans stay in power. The fact that wages are stagnant at the same time Republicans brag RTW is actually raising pay is all you need to know about the lack of critical thinking on the right. It's all BS.

The Economic Policy Institute’s latest report: “Union decline lowers wages of nonunion workers: The overlooked reason why wages are stuck and inequality is growing,” tells us what Democrats have been saying all along. "Key findings from our report include the following:"

2. For nonunion private-sector men without a bachelor’s degree or more education (non–college graduates), weekly wages would be an estimated 8 percent ($58) higher in 2013 if union density remained at its 1979 levels. For a year-round worker, this translates to an annual wage loss of $3,016. As a benchmark, consider that the wage loss from increased trade with low-wage nations (Bivens 2013) among non–college graduates is estimated to be 5 percent.

3. For nonunion private-sector men with a high school diploma or less education, weekly wages would be an estimated 9 percent ($61) higher if union density remained at its 1979 levels. For a year-round worker, this translates to an annual wage loss of about $3,172.

6. At least for middle-wage men, the impact of the erosion of unions on the wages of both union and nonunion workers is likely the largest single factor underlying wage stagnation and wage inequality.

For everyone but Republicans, our vanishing union presence is bad news for a U.S. economy that is 70% dependent on consumer demand:

That presence has vanished throughout much of the private sector, rendering unions unable to exert the same political, economic, and cultural influence over the working lives of average Americans, union and not.

Here are a few easy to read charts, just click to enlarge: 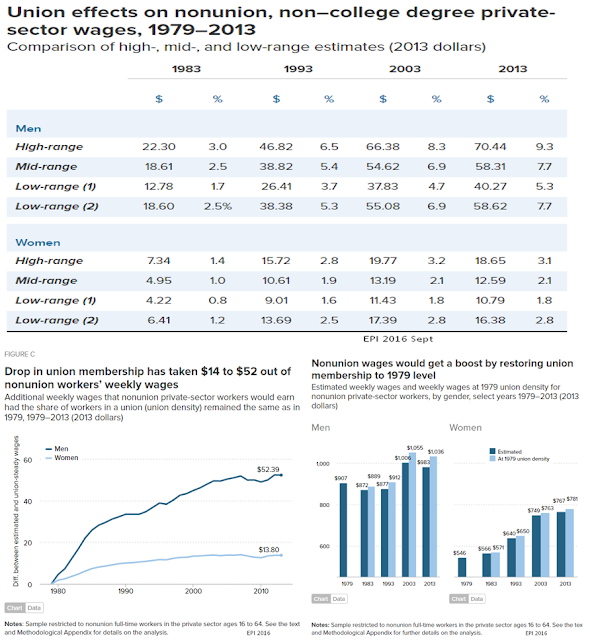