Rampant Republican misogyny, like racism, is coming out of the shadows, and we can thank "The Incredible Trump" for that.

Fox News' opinion writer Todd Starnes summed up how America felt about this:

I wish there was bipartisan agreement demanding Trump never sniffle into his mic again. I was amused by the failed attempt by the media to make something out of this possible sign of cocaine addiction...ah, I didn't mean to suggest he's hooked on drugs, I'm just bring it up...like Trump:


During the debate, Trump's frequent sniffling was a widely discussed topic on social media, giving rise to the hashtag #Trumpsniffle on Twitter. In a TV interview with "Fox and Friends" the following morning, Trump denied being sick, saying "No, no sniffles, no cold," according to Reuters.

"It could be almost anything," said Dr. Alan Mensch. When asked about his sniffling, Trump brought up a technical issue rather than a medical one. "The mike was very bad, but maybe it was good enough to hear breathing,” he told "Fox and Friends."

It's a Mans World: The MIC's Mitch Hank got a few revealing calls from men who weren't shy about their conservative family values and the place woman should have in a mans world:


Caller Paul: "I say Trump take off the gloves, and plow into her. And, and to all the people that say oh, she's a women, you gotta treat her...no, you women out there, you wanna (inaudible) in a mans world..." 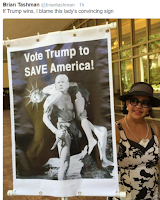 Caller George: "He (Trump) kept his calm, they were waiting for him just to blow up, she was edging (egging) him on, wanting to show the nutty guy, the crazy guy, the sexist pig. He's a real guy!"

Mitch: "Why did he keep lowering himself into the mic, when the mic could have picked him up. He did the 29 interruptions?"

Caller George: "Because he's not a professional...he's not a smooth politician."


Caller Dave: "The Wicked Witch of the East comes out and says, one down and two to go, she's cockin' off...she's the new "Pokeman" (Pokemon) for the game in Japan, so that's what they said about her (laughing)."

Mitch: "Dave are you aware of the rampant misogynist rhetoric you are engaging in..."

Caller Dave: "I don't care, she brings it on herself."