CNN sets up "rock bottom expectations" for Trump in Debates.

Greg Sargent's Morning Plum couldn't help but point out how the media appears hypnotized by the Trump phenomenon, a monster they had a hand in creating.

After a few months of what seemed like career ending missteps, seemingly hour after hour, the Incredible Trump was still standing. The ploy is a familiar one used by Republicans everywhere; throw so much shit into the fan, the media just can't keep up trying to cover it all. And since there's no way they can focus long enough on any one topic, a lot of the big ones get away:


Get ready for news organizations to grade Trump’s debate performance on a massive curve.Here is a depressing harbinger of what’s coming, from CNN today: 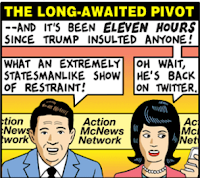 In front of a vast television audience, the GOP nominee could reshape perceptions of his character and readiness — if he can avoid being drawn into gaffes and personality clashes by Clinton. He will benefit from rock-bottom expectations, given controversies whipped up by his tempestuous personality and the vast gulf in experience between Trump and Clinton.

In other words, if Trump doesn’t try to urinate in Clinton’s direction or manages not to vomit all over his podium, he will have “defied expectations.” So presidential! In saying these types of things, news orgs and commentators never allow that they are the ones who decide whether the supposed defiance of expectations in question actually should lead us to lower the bar for a candidate or otherwise factor in to how we judge his or her performance. It shouldn’t.

There will be a lot of pressure on the news orgs not to play this game, but it’s reasonably possible that we’ll see a lot of it, anyway. This is going to be infuriating, so prepare your medicine of choice right now.