Republicans are hard at work making their "in-the-bag" rural voters, and a few city dwellers, even more angry about government, securing their support while sticking it to them in the next budget.

No matter what the final Republican budget looks like, it’s the original draft proposals and ideas that will tell you all you need to know about the party’s soulless lack of humanity and vision.

Proving once again the state can’t afford the tax cuts already in place, and the future tax cuts promised to campaign donors, Wisconsinites could see…WSJ:

1. A decrease of nearly 27 state prosecutor positions to help save $2.4 million.

3. The elimination of the state’s grain inspection program.

4. Fewer course offerings at UW System universities in order to save $195.3 million over two years.

5. Emergency management would stop stockpiling sandbags for communities to fend off floods.

It’s interesting to note the thinking behind these cuts and cost shifts to local governments; forget about 25 years of progress, population growth, inflation, and the negative consequences of meat cleaver tax cuts: 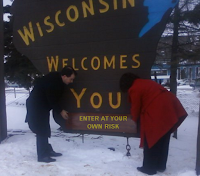 Sen. Chris Kapenga, R-Delafield, said … the law was an important step to “right-size” state government. He noted that the state budget has grown from $26.6 billion in 1991 to $73 billion.

There's a "right-size" to state government?

These now required 5% hypothetical budget cuts submitted under protest by some agencies may not happen, but it does provide an excuse to bring them back later...and they will.

Oh, and Republicans talk big about protecting the integrity of elections and eliminating supposed voter fraud, but get a load of this cut:

Truth be told, I kinda saw that coming a mile away.

And I'll bet you never gave these a second thought:

2. Reducing the amount of salt the department buys for roads.

6. Jettison about $8.5 million in maintenance, such as crack filling and road sealing.

Anyone need to know where the road is late at night thanks to that costly white striping? Or how about road crack filling and sealing so frozen water doesn’t disintegrate road surfaces? That's alright, local governments will be paying for that later.

I don’t know about you, but getting rid of rest stops for travelers is a big one. I actually grade the states I drive through by how much pride they take in their highway system, and how they accommodate visiting motorists who might need to stop for water, rest or use the restrooms.
Posted by John Peterson, Democurmudgeon at 9/22/2016 11:06:00 AM