Here a LINK to the latest coverage where The Center for Media and Democracy's Mary Bottari breaks down just what was illegal in the Guardian story. Good stuff.

Last I checked, you can't break the law because someone on some future date will make what your doing legal. That's what Scott Walker did, and The Guardian newspaper proved that, by exposing leaked documents supposedly "sealed" by the Wisconsin Supreme Court:

WKOW: Documents that have been sealed by the Wisconsin Supreme Court have been leaked to The Guardian, which the publication has now posted online.

This John Doe investigation involving Scott Walker centered around his 2012 recall campaign and whether it illegally coordinated with conservative groups, like Wisconsin Club for Growth. Walker vehemently denied that.

Documents obtained by The Guardian reportedly indicate otherwise. They posted the leaked documents online Wednesday morning, along with a lengthy article.

The title of The Guardian piece is lifted from this section: 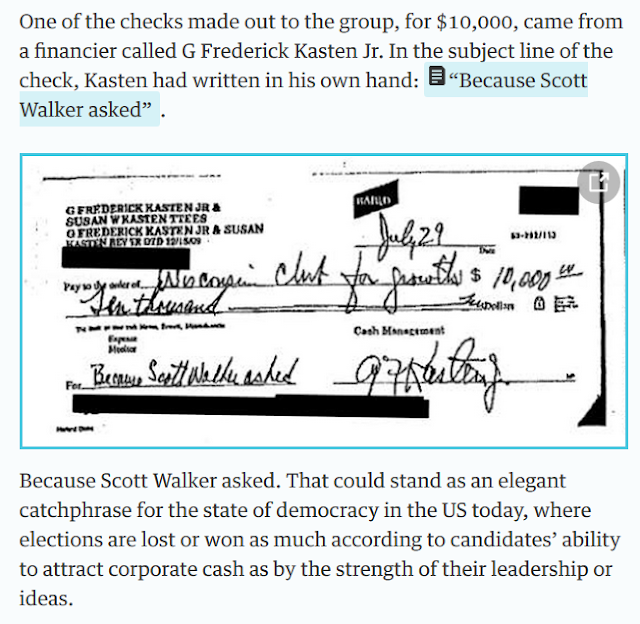 The not so shocking backroom directives claiming voter fraud and feigned whining about the Democrats stealing elections proves these are only talking points with no basis in fact. John Nichols wrote about it:

Assembly Democratic Leader Peter Barca of Kenosha told the Wisconsin State Journa; that the exchange shows Republicans “clearly had no qualms about deceiving Wisconsin voters. This latest revelation exposes the way the Republican spin machine works — they  were prepared to simply make things up,” Barca said.

And because proving money buys political influence is no longer provable in our courts because the Supreme Court activist conservative Justices said so,


Supreme Court Justice Anthony Kennedy: "Independent expenditures do not lead to, or create the appearance of, quid pro quo corruption."


The Guardian U.S., an arm of the British newspaper, reported that the billionaire owner of NL Industries, a producer of the lead formerly used in paint, contributed $750,000 to the Wisconsin Club for Growth in 2011 and 2012. The donations were made before and after Republicans approved two laws to help the industry — one in January 2011 and the other in June 2013.

Walker's campaign immediately said there was no sign the Republican governor had done anything wrong but did not directly address the donations from Simmons or the legislation touching on lead paint lawsuits.

Love this donation...looks like Walker's support for Trump is the quid pro quo:

And if you were wondering how independent our Supreme Court really is after taking massive donations from a few powerful individuals...check out Prosser's last line: 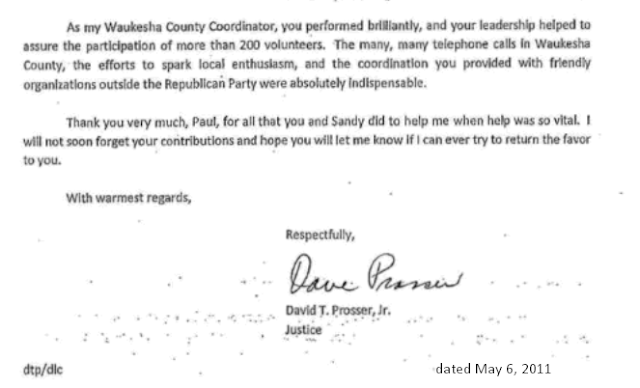 Oh, how about the mythical threat of election fraud? Oh, is it just "messaging" to dupe Walker supporters?

And this contained my favorite line out of the whole story: "send lawyers guns and money:"

Here's this afternoon's Thom Hartmann interview with The Guardian: