Republicans either think it’s funny or a good idea to appoint fellow legislators to public policy they hate the most. And so it is with Sen. Steve Nass, the bigoted racist overseeing our state universities.

He's not what I would call a great defender of the 1st Amendment. Remember these violations? 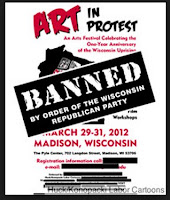 2. He expressed cutting funding of a UW-Madison center because its studies were "too far to the left."

4. Republican Rep. Steve Nass has gotten the UW’s School for Workers to cancel an “Art in Protest” exhibit that had been scheduled for next month. “The problem with it is that it would be funded with taxpayer dollars and that’s through the Extension.” Nass charges the exhibit would have provided a one-sided view of last year’s protests at the Capitol, with UW Extension taking the side of protesters. “I did indicate to Extension that … any problems that arise from that, or any misbehavior by the protesters – which I certainly would expect, it would probably be very despicable … and I will be watching.”

lawyer to resign for sending an email offering legal advice to Democratic state senators after they fled the state in February.

6. Rep. Stephen Nass is calling for the review that could result in a possible removal from Tubbs' position as Capitol Police Chief. Nass said, "By not doing anything, by treating them with kid gloves, that made it worse. If they'd done more, we would not be seeing what we're seeing today." Nass said, "If they were arrested vigorously, I believe that would slow them [protesters]."

He also co-wrote a bill that would amend statutes allowing the use of race-based nicknames, logos, mascots and team names by school boards. A swell racist guy.

Race Relations Sinister Liberal Plot: Nass is Mr. Big Government himself, micromanaging and threatening the university systems at every turn with defunding, if they don't "voluntarily" back down. WPR: 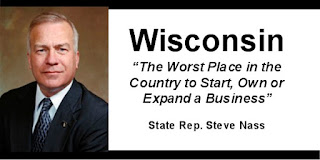 Sen. Steve Nass says a new diversity outreach program at the University of Wisconsin-Madison is "sinister" … made the comments Thursday in reaction to UW-Madison announcing its plans to improve the experiences of minorities on the flagship campus.

That’s right, improving our social differences with ethnic studies is considered something liberals do, which by itself a scorching indictment of the rot, hate and racism growing within the Wisconsin Republican Party. What else would explain having a tantrum over a new cultural center and increased ethnic studies:

Nass is carrying out the will of his districts voters though, and they must be proud. Yes, he was so good in the assembly that they made him a senator, just so he could battle against those sinister liberal enemies of American exceptionalism:

And as we all know, students always react well to being told how to think and act:

He said the initiative isn't about advancing critical thinking, but about "telling students to think and act in ways approved by the liberal leadership of our universities."