It's true Trump voters don't care what he says or if he's lying, since they think the liberal press is going after him with a vengeance anyway. Fight fire with fire, lies with lies. While Clinton has the "appearance" of not telling the truth, depending on the media spin, Trump's a proven liar by over 53% by fact checkers. 70% at one. Here's more...

A candidate who wallows in bigotry, who incites violence, who verbally abuses his critics, who is a self-avowed threat to the free press, who trashes U.S. generals while praising Vladimir Putin, who demeans Gold Star families, gets less negative coverage than his opponent, a lifelong public servant who is one of the most accomplished and admired women on the planet. 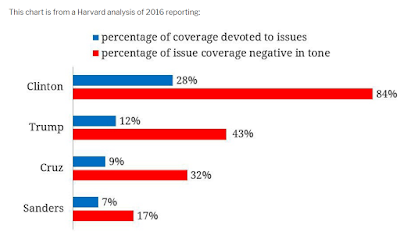 For the duration of the 2016 election, Clinton has been subjected to hostile commentary, misleading analysis, deceptive reporting, and outright poll manipulation ... Hillary has some things she should have handled better, but that’s about it ... there’s no serious scandal on her record ... no evidence that she’s ever sold out to Wall Street ... no corruption, intrigue, or deceit. Kevin Drum explains: Washington Post: “There is no equivalence between Ms. Clinton’s wrongs and Mr. Trump’s manifest unfitness for office.”

Trump says that taxes in the United States are higher than almost anywhere else on earth. They’re not. He says he opposed the Iraq war from the start. He didn’t. Now, after years of spreading the lie that President Obama was born in Africa, Trump says that Hillary Clinton did it first (untrue) and that he’s the one who put the controversy to rest (also untrue). Never in modern presidential politics has a major candidate made false statements as routinely as Trump has. “It gives him not only license, but incentive to spin fantasy, because no one expects him to tell the truth,” said Republican strategist Rob Stutzman, who worked against Trump during the primaries. “They believe they’re getting lied to constantly, so if their hero tells lies in order to strike back, they don’t care.”

Republicans have used Clinton’s use of a private email server when she was secretary of State to cast doubt on her honesty, saying she has been untrustworthy for 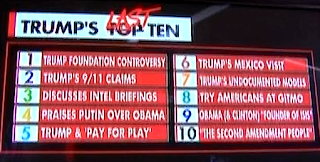 decades. Nonetheless, the scope of Trump’s falsehoods is unprecedented, and he is dogged in refusing to stop saying things once they are proved untrue.

Republicans have used Clinton’s use of a private email server when she was secretary of State to cast doubt on her honesty, saying she has been untrustworthy for decades. Nonetheless, the scope of Trump’s falsehoods is unprecedented, and he is dogged in refusing to stop saying things once they are proved untrue.

BuzzFeed unearthed an audio recording showing that Trump backed the Iraq invasion and a 2011 video in which he called for swift military action against Moammar Kadafi, then the leader of Libya. In the months since those disclosures, Trump has lied dozens of times on both issues, saying he opposed the use of force in Iraq and Libya. 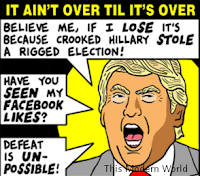 Thomas E. Mann, a resident scholar at UC Berkeley’s Institute of Governmental Studies, said Trump appears to recognize that a faction of the Republican Party has lost respect for facts, evidence and science — presuming, for example, that anything negative said about Obama is probably true.

PolitiFact at the Tampa Bay Times … has rated 70% of the Trump statements it has checked as mostly false, false or “pants on fire,” its lowest score. By contrast, 28% of Clinton’s statements earned those ratings. “As we noted … no other politician has as many statements rated so far down the dial,” PolitiFact writer Lauren Carroll reported in June. “It’s unlike anything we’ve ever seen.”

Marty Kaplan, a professor of entertainment, media and society at USC’s Annenberg School for Communication and Journalism, “I’m confused,” he said, “whether the whole fact-free zone that he’s in is a strategic calculation or a kind of psychosis.” 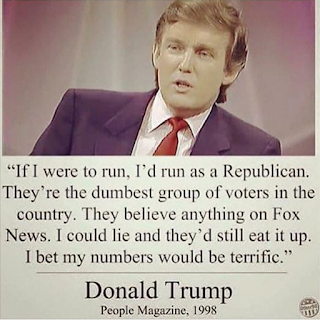