Did Mitt Romney just insult every Trump voter? Welcome to the 47% club folks.

My conservative friend in Milwaukee called and reminded me to watch Mitt Romney trash Trump this morning, so I tuned in and recorded it. Romney did just that. So I asked my friend who he thought put Trump in the lead. Instead of saying conservative voters, he said "Obama." Welcome to Obama derangement syndrome.

Romney's statement was so brutal, so over the top final, you've got to believe the Republican Party has a bullet proof plan to usurp the will of GOP voters. 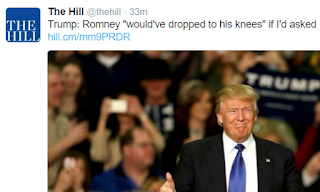 I'm posting Romney's historically bizarre Trump take down as a marker where the Republican Party completely destroyed the American political process once and for all.

Breathtaking and amazing, we have to wonder where Republicans will take our political system in 5, 10, 15 years?

Also take note of Romney's now trademark "doe-eyed" look of an innocent little boy trying to please his audience. What a con:

All this from two wealthy guys who inherited their money. What is it about privilege?

And as usual, the Republican pick for president had this classy thing to say...

And the irony of what Sen. John McCain is saying.... 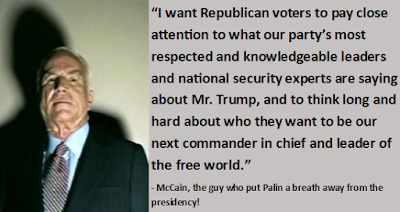