There is no precedent for what Republicans are doing to delay the nomination of Obama's justice pick. The fact that they've come clean, like it wasn't obvious with all the GOP lawsuits in front of the court, they expected a certain, activist outcome, and got it most of the time.

Chief Justice John Roberts noticed, and said what most of us have been saying for centuries. The trolls will be bumping into walls after this one...: 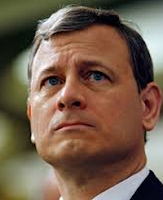 Ten days before Justice Antonin Scalia died, launching the political battle over who would fill his vacancy, Chief Justice John Roberts delivered a speech slamming the Supreme Court nomination process. In remarks at Boston's New England Law, The New York Times reportsthat Roberts denounced the politicization of the process that he says is really just meant to ensure that nominees are qualified for the job.

"We don't work as Democrats or Republicans," the chief justice said, "and I think it's a very unfortunate impression the public might get from the confirmation process."

Roberts pointed out that while nominees back in his day were easily confirmed, the last three justices — Samuel Alito Jr., Sonia Sotomayor, and Elena Kagan — have all faced split votes from the Senate. "Look at my more recent colleagues, all extremely well qualified for the court and the votes were, I think, strictly on party lines for the last three of them, or close to it, and that doesn't make any sense," Roberts said. "That suggests to me that the process is being used for something other than ensuring the qualifications of the nominees."

President Obama nominated Merrick Garland to the Supreme Court last week, despite Republicans' promises that they will deny any Obama nominee in favor of letting the next president fill the vacancy.