It's just a simple invitation with no political slant whatsoever. CapTimes: 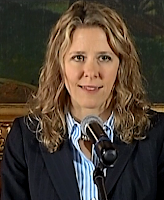 These Republican co-chairs of the Legislature's budget committee, who know just where the special interest money is since they've been taking it for years themselves, are just good citizens exercising their free speech rights. What, no qualms about the lack of Democratic attendees?

But Bradley's campaign says their support is no different than a standard campaign endorsement.

Republican voters will look past this supreme court sell out to special interest money too, by reminding us matter of factly, "losing sucks."

In a Facebook post published over the weekend, Appeals Court Judge Gary Sherman wrote that the fundraiser makes "plain for all to see" the "coordination between the Supreme Court and the political branches of our government."

Taking that Citizens United idea that money does not have a corrupting influence to the next level:


Justice Bradley has always stated that she follows the rule of law and swore an oath to uphold the Wisconsin and U.S. Constitutions as they are written, not by who endorses her campaign."