Trump voters should be proud...

I don't know why, but suddenly an avalanche of stuff is coming out on Trump, and none of its good. Funniest thing? When Trump takes a jab at the reports, no matter how heinous, sick or brutal, he turns it into Trump loving ammunition against his critics. Really, there's no stopping this slide into despotism.

This first clip is an overall look at how Trump incites the mindless clone army:

Trump won't hesitate to set a bad example, like legally defending the guy who sucker punched another American at one of his rallies:

Loved this gif pairing Trump with a troublesome Bernie Sanders...

The comparisons are finally in, and it looks like Donald Trump is going to be the worlds next Hitler: 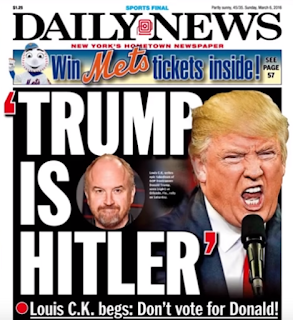 The best person to appear as Hitler? Welcome Sarah Silverman, on Conan O'Brien:

Ted Cruz did a fine job finding a creative ad agency that gave us a kids eye view of Trump:

Check out the different hate filled events taking place across the country, as Trump voters live out their "leaders" most authoritarian fantasies. Hover your mouse over each face for a popup story:

Labels: Trump, Trump is Hitler
Email ThisBlogThis!Share to TwitterShare to FacebookShare to Pinterest