Could someone so ideologically driven like Rebecca Bradley change her view of "queers," as she describes them, and Americans she said are "totally stupid or entirely evil" for voting for Bill Clinton? Didn't think so.

Bradley said Monday she was embarrassed about the columns "as a very young student, upset about the outcome of that presidential election"

Never a great judge of character (6 of his closest aides convicted in the first John Doe investigation), Walker stepped in it again...: 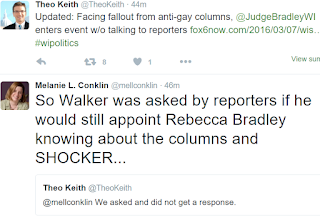 A spokeswoman for Gov. Scott Walker, who appointed Bradley to three judgeships in as many years, said on Monday that "neither the Governor nor our office was aware of the columns."

In a statement, Walker said Bradley "appropriately made it clear today that a column written in college does not reflect her views as a Supreme Court Justice, a court of appeals judge, a circuit court judge or as an attorney."

They don't reflect her views today? Why would we assume that, when these weren't just one or two ambiguous statements, they were pretty clear:


Scott Foval, the Madison-based Regional Political Coordinator for the national organization People For the American Way, said "I question how anyone in the LGBTQ community, or anyone living with HIV/AIDS feels they could get a fair decision from her. The demeaning statements she authored gravely undermines her ability to continue to serve on the state Supreme Court.”

We've got to stop using "question" when "can't" works even better. Here's the WISC coverage:


The thinness of Bradley’s legal resume left her referencing things like a college term paper she wrote in applying for one of the unprecedented three appointments in three years by Gov. Scott Walker. And while disclosing other articles she authored, she specifically failed to make any mention of her newspaper writings.

She was young, angry about Bill Clinton's win, why would we ever doubt her impartiality and ability to leave politics out of her decision making? 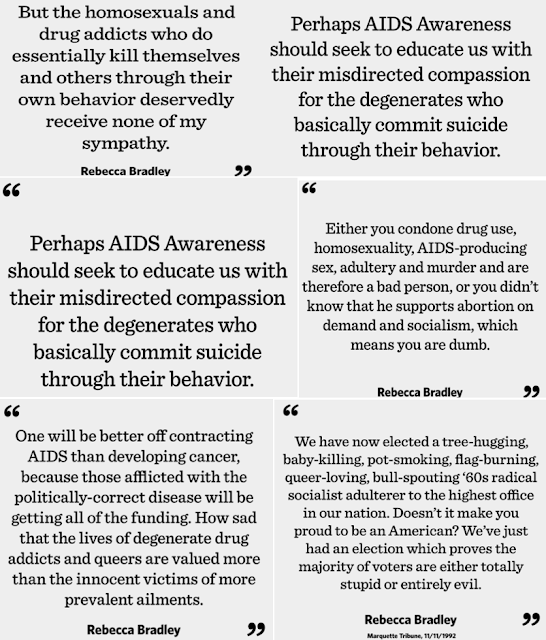 Sen. Baldwin got the word:

Senator Tammy Baldwin, who just so happens to be the first openly gay person to serve in the Senate, called Judge Bradley's trash opinions "hate speech."

Milwaukee's Fox 6 had this take: