No Precedent for Delaying Justice Nomination, No "Biden Rule." Republican keep on lying....

No better example of the right wing "bubble world" alternative reality than the fake "precedent" of never approving a justice nominee in a presidential year. They've been proven wrong so many times, and so many times they keep repeating it:

From today's PolitiFact came this revelation, with a picture: 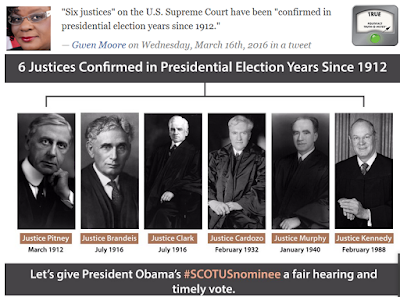 As to Moore’s claim, we covered much of this ground in a March 2016 fact check when Ryan said: "There is a precedent" for not nominating someone to the U.S. Supreme Court "in the middle of a presidential election." We rated his statement False.

Now of course Republican laughing stock Joe Biden is so wise he's shaping their justice nomination policy around a comment he made some time ago:

Mitch McConnell cites non-existent clause in the “Biden Rule” as reason there will be no Senate hearing for Supreme Court nominee Merrick Garland: The Senate Majority Leader said that the august body "will continue to honor the Biden rule," which doesn't exist

Who knew Biden still had this much sway in the Senate, especially with Republicans? McConnell's complete misreading of the "rule," which was nothing more than an observation, is something called "a Humpty Dumptyism." It predates the Biden Rule. It's "the practice of insisting that a word or sentence means whatever one wishes it to."

I don't know how they did it, but they couldn't even get this one right. This is the "Biden Rule:"


Biden made an observation to the effect that if an outgoing president nominates someone before the summer of his last term in office, that person typically receives the Senate’s approval, but that if he or she is nominated during the summer, that person does not — meaning that McConnell even gets what could be called the “Biden Observation” wrong.

Republicans got the wrong impression somewhere along the way, that the people didn't decide that when they voted twice for Obama. Or they're just making it up as they go along. Did they forget?

Even after facing the inconvenient fact the "Biden Rule" is a power elite fiction made up by Senators, Republican true believers won't budge from their easy bubble world answer: Alexander Hamilton's writings in The Federalist explained the "originalist" thought behind getting the Senates consent; basically trying to get politics out of the process:

To Hamilton the added advantage of providing “excellent check upon a spirit of favoritism in the president, and would tend greatly to preventing the appointment of unfit characters from state prejudice, from family connection, from personal attachment, or from a view to popularity.”