Rebecca Bradley's short lived half ass'ed apology is turning into an all out attack on the media and One Wisconsin Now. Bradley ran for cover on conservative talk radio, getting the extra spin machine treatment. Didn't she once say she was "non-partisan." No time for that when your in a full blown public image disaster like this.

Republican trolls may hate liberals more than anything, but when one of their own screws up, they're okay with being just like liberals. Like magic, they're exempt from their strongly held "principles" and responsibilities.

Not remotely comparable (see for yourself), but a lot easier than watching the Bradley self destruct.
Anyone think Bradley actually apologized for her comments?

"To those offended by comments I made as a young college student, I apologize..."

...and to those who agree with Bradley? They know, wink, wink, they got the message.

Did her bigotry and condescending view of Democratic voters humble Bradley? Nope, she fought back and blamed the messenger for quoting her verbatim:

She also accused One Wisconsin Now of conducting a "blatant mudslinging campaign to distract the people from the issues at hand," according to the Wisconsin State Journal.

Is it possible a conservative would not hold the following conservative values repeated ad nauseam in the presidential race?

An Associated Press review of the Marquette University student newspaper on Tuesday uncovered columns by Bradley where she defends the school's Warriors mascot and criticizes political correctness as a "frightening trend."

She wrote in April 1992 that "The PC movement is entirely the agenda of feminists, gays, liberal extremists and 1960's radicals who never left school and consequently are largely ignorant of the real world."

What the hell does she know about the 60's?

And how about this non-answer response from Scott Walker, : 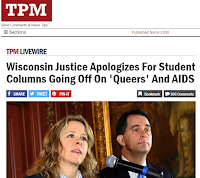 "It's really irrelevant in that it's now up to the voters to decide come... April," Walker said. When asked, Walker would not explicitly condemn Bradley's comments or share his own views on the subject.

He said Bradley's early views did not reflect those of young conservative activists, like himself, at the time.

But just as frightening is Walker's lack of concern over putting a justice on the state's highest court that held these strong bigoted and intolerant views:


Walker said the question of whether he would have appointed Bradley to the Supreme Court had he seen her 1992 opinion pieces is irrelevant.

Walker also believes conservative activist judges and justices never have a reason to recuse themselves:

Asked if Bradley would have to recuse herself from significant cases involving discrimination of gay and lesbian people, Walker said no, because there is nothing in her judicial record that suggests she would be biased on those issues. 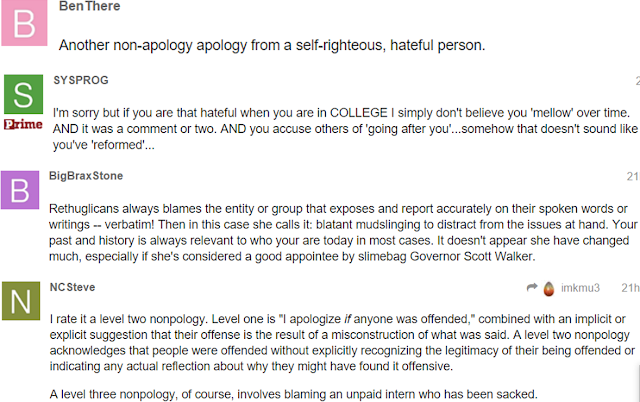