The question here is this; just how much has Rebecca Bradley changed, or will we find out she's been replaced by her doppelganger. I mean really, this is getting ridiculous.

Nothing Unusual: A lot of Rebecca Bradley’s comments are typically conservative, no big surprise. But as a nominee and sitting appointed Justice on the State Supreme Court, yikes.

Bradley is an extreme right winger. No wonder Scott Walker wasn’t shy or even a wee bit hesitant to appoint her three times. To him, she was conservative activist gold.

We now have to ask ourselves why we would trust the judgement of Scott Walker, who started off his first term seeing 6 close aides convicted during the first John Doe. 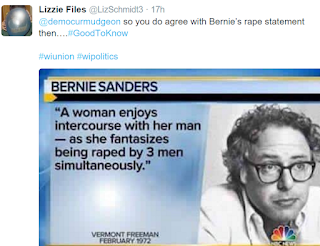 On that rape thing, I wonder how this Twitter troll is going to deal with her obsession over Sanders' 1972 essay, pictured here:

We all know how bad Justice Thomas is. Nobody was fooled by his ploy to play the victim during his nomination hearings. But playing off that, this is a real Bradley gem:


"Feminists whined about the 'ordeal' perjurer Anita Hill suffered under the male-dominated Senate judiciary committee ... I call Murphy Brown the 'near-perfect' feminist model only because she failed to abort her baby."

It's almost like reading a transcript of Vicki McKenna's pathetic excuse for a radio show. Sadly, Bradley is running out of excuses in this career pile up:

Asked if she could clarify what she meant when she wrote Paglia "legitimately suggested that women play a role in date rape," Bradley told the Cap Times she would need to go back and look at the column again, noting that it's 24 years old … "I wrote opinion pieces 24 years ago on a variety of issues, and they are opinions that some people may agree with, some people might disagree with. I really haven’t gone back to read all of them. It’s been quite some time."

There is no way Bradley will be seen as anything but an extreme activist jurist.


Her campaign did not immediately respond to a message seeking comment on the latest release.