My god how bad can this get? I guess we can rule any kind of vetting process by the Walker administration. Let's take a look at what we know about Justice candidate Rebecca Bradley so far: 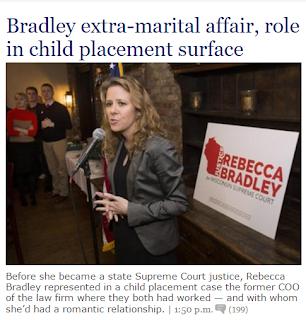 JS: The matter raises questions about the vetting process used by Walker, who has acknowledged he was unaware of college newpaper writings by Bradley in which she condemned "queers" and addicts for essentially killing themselves through their conduct, called voters stupid or evil for electing Bill Clinton president, and compared abortion to the Holocaust and slavery. In one column, she also wrote: "Heterosexual sex is very healthy in a loving marital relationship. Homosexual sex, however, kills."


As a private attorney, Rebecca Bradley represented in a child placement case the former chief operating officer of the law firm where both had previously worked — and with whom she acknowledged having had an extra-marital affair, according to court records.

At the time, the ex-wife of J. Andrew Bednall objected to Bradley's representation based on her relationship with Bednall, the records show. The court-appointed attorney overseeing the interests of Bednall's son in the 2005 placement case agreed with those concerns.

Bradley responded in a January 2005 affidavit that she could remain on the case."At one time I had a romantic relationship with (Bednall), which we both believed might result in marriage. We broke off that relationship in November 2002, although we have continued to date on a nonexclusive basis since that time," wrote Bradley, who was divorced in 2004.

Bradley the Victim? Sure, and blame the messenger (JS) while you're at it:


"I'm not sure what you're talking about or what you're trying to do to me," she said. "There were motions filed in that case and the judge dismissed them and that's all I have to say. The Milwaukee Journal Sentinel should be ashamed of itself and you can put that on the record."

The test for GOP voters will be do they vote for her anyway, because "they won, get over it," or opt to put someone responsible in. In this day of Trump and Cruz, I'm not sure.