Now that the public and press have finally picked up on Trump's right wing authoritarianism, I thought it would be a good to take a look again at Wisconsin's own authoritarian despot; Scott Walker. Walker's presidential spilled over with scary gems like this: 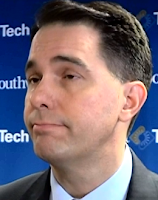 Reuters-Scott Walker on Iran: "This is not a country we should be doing business with ... The United States needs a foreign policy that puts steel in the face of our enemies." "We don’t need more information, we don’t need to wait to confirm the next Secretary of State, we need decisive leadership and we need it now. This won’t be easy, but when America leads, and has a strong president with clear priorities who believes in American strength, the rest of the world will follow."

Walker's ambitious campaign agenda was peppered with outright authoritarian edicts that somehow got lost in the coverage. Like the following frightening plan to break the country up into little fiefdoms.

Walker to spin off states, dissolve "United" States, saying it's too big to fail!!!

Like another poisonous snake we're all familiar with, Scott Walker is rattling, and he's about to strike. So you've got to ask; shouldn't we do something?

In a just released interview with right wing spinmeister Breitbart, Walker doesn't acknowledge the existence of an opposition party. He doesn't care if most Americans disagree with what he has planned for popular government programs polling says people support overwhelmingly.

Carrying out the rest of his divide and conquer agenda, he would separate the states into miniature country-like entities, with their own transportation, infrastructure, workforce, and environmental laws. And he wants a tough punishment base system of social safety nets that would make anyone down on their luck wish they were never born: 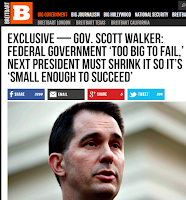 Walker said that if he’s elected president in 2016, he’d aim to severely cut back on the size and scope of the federal government—and he touted his experience battling the unions in Wisconsin.

“For me, what I learned from what we did four years ago in Wisconsin, is you got to strike early” ... I’d like to take huge chunks of the federal government and send it back to the states. For years people have talked about Medicaid—that’s a good start, to block grant that. But I’d take major social service programs, I’d take transportation and infrastructure, workforce and development, environmental protection, and heck I’d take education and instead of spending each of those down from Washington where the federal government skims off huge chunks of money and sends pennies on the dollar back to the state governments, why not keep those dollars back in the states where states can be more effective, more efficient, and certainly be held accountable to the hardworking taxpayers?

It's hard to be accountable under a one party system, you think?

The closer this guy gets to the presidency, the more nervous I'm becoming. Here's audio of his comment:

Former Nixon counsel John Dean wrote an entire expose' on Walker, because yes, that's how obvious Walker has been about his intentions. Walker isn't just a "conservative without a conscience," as Dean has written, he's a "double high" authoritarian, shaping the country around his singular vision of power. Dean wrote this back in March of 2012, believe it or not:

My focus here is on Wisconsin Governor Scott Walker, who strikes some who have written to me as a distinctively prototypical authoritarian politician; what social science has labeled as a “double high” authoritarian; and the type of person which I described in my book as a conservative without conscience.

There are many examples of Walker’s harsh and uncaring treatment of those whom he does not believe to be entitled to equality.

And "slick" is too kind a word to use; liar works just fine, according to Dean: 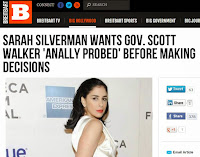 His lying is notorious. Politifacts Wisconsin finds Walker to be an accomplished falsifier. I watched a video of a Walker speech at the Goldwater Institute.  He’s slick; fast-talking, confident, and dishonest—I watched him distort facts with which I was familiar.  He spoke in mostly half-truths. About twenty-five percent of the population has, in varying degrees, (a) disposition to follow a double high authoritarian, many blindly or simply because it assuages their fears.  And, of course, these are aggressive followers who can attract others who are unaware of the nature of the person they are electing, thus enabling an authoritarian leader like Walker to gain ever-growing control. Good luck, Wisconsin.