The NRA's Guns for Kids Programs: Red Riding Hood has a Gun, and Iowa's Toddler Militia?.

Here's a couple of really bad idea's, backed by the radical gun lobby group, the NRA, to put guns in the hands of our kids: 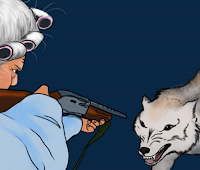 Adding guns to the world of the Brothers Grimm drastically reduces death rates, according to a couple of stories published by the NRA. In the NRA's reimagined fairy tales, putting rifles in the hands of children creates a safer world.

The NRA Family site published its first reimagined fairy tale — "Little Red Riding Hood (Has A Gun)" in January, and followed up with "Hansel and Gretel (Have Guns)" last week.


@Scott_Craven2 offered: "The porridge was too cold, the bed was too hard, but this AK47 is just right. Who's up for some bearskin rugs?"

Just a sample of the NRA's fractured fairly tales:

In the NRA's rewrite, Little Red Riding Hood walks through the woods with a rifle in her hands, warding off the wolf along the path. "The wolf leaned in, jaws open wide, then stopped suddenly. Those big ears heard the unmistakable sound of a shotgun's safety being clicked off. Those big eyes looked down and saw that grandma had a scattergun aimed right at him. He realized that Grandmother hadn't been backing away from him; she had been moving towards her shotgun to protect herself and her home.

Or the classic Hansel and Gretel: The two kids set out into the woods to feed the family. Gretel takes down a 10-point buck ... When they see the gingerbread house, they save two boys who were trapped by the witch.

Like all bills named by Republicans and the NRA, they usually mean just the opposite of the legislation. Yahoo News:


The Youth Safety & Parental Rights Act (House File 2281), (would let) people under the age of 14 be permitted to handle “a pistol, revolver or the ammunition” in the presence of an adult. Current law prohibits anyone under 14 to use handguns, and plenty of Iowans want to keep it that way.

Democratic Rep. Kirstin Running-Marquardt, who supports the right to bear arms and worked in a gun store for about five years, spoke out against the bill, saying, “We do not need a militia of toddlers.” Running-Marquardt said ... handguns are simply inappropriate for very young children and don’t even fit their hands.

Regarding “parental rights,” Running-Marquardt noted that there many things children in Iowa are not allowed to do: They cannot drive under 14 (even with parental supervision) or be employed under 10. “You have to balance the rights of the children with their life and safety."

Ya think? Just how did this happen? You can blame one dad's selfish intentions and complete disregard for every other kid in the state:


Nathan Gibson, a hunter, has been lobbying for the bill on behalf of his daughters, Natalie and Meredith, 12 and 10, who share his passion for shooting as a sport. The bill, he said, would allow Natalie and Meredith to participate in youth events with the Scholastic Shooting Sports Foundation. “This is literally about youth scholastic shooting, which leads to eventually, potentially as a father could hope, an Olympic gold medal, scholarships, things like that,” Gibson said to Yahoo News. “It’s about my daughters’ sport.”

Why didn't the bill address a logical age limit for kids participating in competitive sports only? Because Republicans can't govern:


But Running-Marquardt said the bill is so poorly worded that it does not specify an age at which children could use handguns or make exceptions for children training for competitions. The National Rifle Association strongly supports the bill ... Republican Rep. Jake Highfill, who proposed the bill, did not respond to a request for comment from Yahoo News.