Critic uses the "C-Word?" What a weird, inappropriate lie coming from a candidate for the Supreme Court who also broke the judicial code!!!

I don't know why the media isn't picking up on the one glaring problem Rebecca Bradley has...her temperament. Her mean girl antics have reached the surreal stage.

One critic has been using Bradley's own words and deep political resentments against her, destroying her credibility as a judge or justice.

So what does she do? She accused him of using the "c-word" on Twitter. The Journal Sentinel investigated and didn't find any evidence to back up Bradley's juvenile claim. 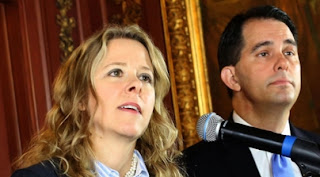 It's becoming very clear Bradley is undeniably an in your face conservative. It's not something that changes over time, especially now. Why are we even entertaining that possibility?

The "c-word," really? To falsely accused One Wisconsin Now's Scot Ross of using it in his tweets, with no evidence to back it up, makes you wonder what she'll do on the bench to justify some wacky decision:


JS: The c-word. At a Tuesday forum before the Dane County Bar Association, Bradley criticized the director of the liberal group One Wisconsin Now for his postings on Twitter, accusing him of "regularly using the c-word."

The group's executive director, Scot Ross, said he has never done that, and a review of his Twitter feed does not show instances of that happening. Ross has taken criticism from conservatives for his Twitter commentary, such as when he called former Arizona Gov. Jan Brewer a "racist anus."

But character assassination is only he beginning. She's even broken the judicial code already, yes, while she's applying for a job on the states highest court:


Kloppenburg criticized Bradley for discussing a recent Supreme Court decision because the losing party has asked the justices to reconsider their ruling. "She's talked about that case when there's a pending motion for reconsideration in that case," Kloppenburg said. "Our judicial code of conduct prohibits any justice from talking about such a case and because of the way ethical complaints are handled against justices right now, it's likely that nothing would come of such an ethical lapse."

Bradley's response was to deny reality:

"An allegation of an ethical lapse, it simply isn't true whatsoever."

Huh? Here's what happened, but shouldn't have:

Kloppenburg's allegation against Bradley was over her willingness to discuss a 4-3 decision last month that found that evidence that was seized when police entered a room without the owner's permission could be used because the police officers were checking on someone's safety. Bradley wasn't on the court when the case was argued, but she said she helped decide it to avoid a 3-3 split that wouldn't have resolved the case.

Bradley was just doing us all a big favor...well, not all of us:

"The people would be deprived of a decision from the Wisconsin Supreme Court. So I elected to participate in those cases, doing my job for the people of Wisconsin so they can get a decision."

The man who lost the case has asked the Supreme Court to reconsider the decision, arguing Bradley's participation in the case violated his constitutional rights to due process and equal protection.