What the hell Democrats? The “battered partner” party has secured itself as a minority fringe group of spineless whiners. You can forget about our current band of losers ever standing up for anything specific, unless Republicans bring it up first.

Adding to the Republicans long list of trashing local control,now with the help of Democrats, is this gem: 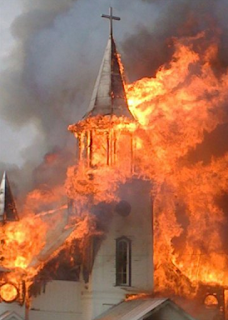 Local fire departments would have to allow Christmas trees in churches under a measure that passed the Senate … The plan would prohibit cities from enacting or enforcing any rules related to fire safety that prohibit the placement of a Christmas tree in a church. It would also apply to the rotunda of the state Capitol.

A live tree in the Capitol makes sense because the building is under the watchful eye of security at all times, but churches?


Whitewater-area Republican Sen. Steve Nass called it a common sense bill. "Never did I think that we would be here in the state Senate having to pass legislation so people can enjoy a Christmas Tree."

The plan passed on a bipartisan 25-7 vote.

Anytime you make a guy like Republican Steve Nass seem like the voice of reason, you've got a big identity problem. Why weren’t Democrats on the same page with Sen. Fred Risser about letting local government decide?

Sen. Fred Risser said the bill was essentially asking local officials to ignore their own judgement. "Can you imagine legislating against fire safety?" he said. "That's what we're doing here."

The cowering Democrats that went along with this party breakdown should be ashamed.
Posted by John Peterson, Democurmudgeon at 3/17/2016 08:53:00 AM