Walker loses to Minnesota, in Political Test of Ideologies.

One of the best articles yet comparing Minnesota's blue success with Wisconsin's red failure, appeared in the LaCrosse Tribune over the weekend. By every measurement it's embarrassing. And we reelected this guy? What are the consequences of the differing governing styles and legislative agendas? It will take your breath away: 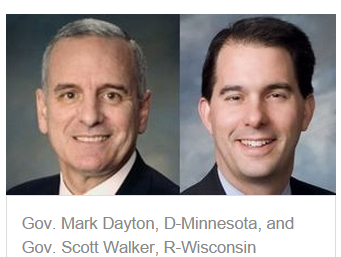 Walker’s tax plan reduced the highest rate for the wealthiest Wisconsinites from 7.75 to 7.65 percent and brought slight relief to all income levels. Dayton’s plan created a new rate of 9.850 percent for the top 2 percent of Minnesota’s wealthiest. His plan also increased tax credits for renters — the opposite of Wisconsin, where those tax credits were reduced. Dayton also signed a $508 million tax cut in 2014 of which $232 million was aimed at the middle class and $232 million was earmarked for the elimination of some business taxes.

Minnesota has increased its minimum wage to $9.50 an hour and has it indexed to increase with inflation. Walker has said he does not support raising the minimum wage.

It doesn't stop there either...


Under Walker, Wisconsin has been a leader in cutting education spending. ranked No. 2 in the nation — behind only Alabama — with a $1,038 spending per student decrease. Minnesota was one of a handful of states that actually increases spending during that time.

Minnesota took Medicaid money and created its own health care marketplace, reducing the number of uninsured residents. Wisconsin rejected federal money ...  That cost the state an estimated $206 million over the past two years and an estimated $460 million through 2020.

The business-friendly policy embraced by Walker has resulted in private-sector job growth that continues to lag behind the national average. The latest 12-month period numbers that ended in June show Wisconsin 32nd in the nation in job growth. Minnesota was 26th. Minnesota’s jobless rate in November was 3.7 percent. Wisconsin’s was 5.2.

Forbes ranks Minnesota as the ninth best state for business, No. 7 in economic climate and No. 2 in quality of life. Wisconsin is ranked 32nd, 27 and 17 on the same measures.

The cost of doing business in Minnesota is 0.2 percent below the national average. Wisconsin is 1.7 percent above the average. The median household income in Minnesota is about $60,000. It’s just below $52,000 in Wisconsin.

Clearly the ideology of both governors and legislatures steered the course. Walker is one of the nation’s most conservative governors who has eagerly embraced policies and ideas driven by the American Legislative Exchange Council, ALEC. Wisconsin has become a national laboratory for ALEC policies.

An analysis done by Menzie Chinn, a University of Wisconsin economist, measured private nonfarm job growth in four states — California, Wisconsin, Kansas and Minnesota — that elected new governors in 2010. Wisconsin and Kansas are ALEC-friendly. Minnesota and California are not. Minnesota was ranked 46th and California ranked 47th on an ALEC-economic index that measures taxes, public employees per capita, minimum wage and right-to-work law — among others. Yet those states grew more jobs than Kansas (ranked 15th by ALEC) and Wisconsin (ranked 17th).

Chinn compared ALEC rankings to all 50 states and found the same correlation. States that received a higher ALEC ranking on how it was expected to perform economically based on 15 policy areas had worse economic growth when it comes to creating jobs.