Walker throws $220 Million at Buck's, cuts UW Funding by $330 million. What an investment.

Just amazing. As pointed out by Jake's Economic TA Fun House in the picture below, nothing said "Republican" and Scott Walker more than the proposal to give the Bucks a $220 million loan, while cutting the UW's funding by $330 million, all in the same budget. 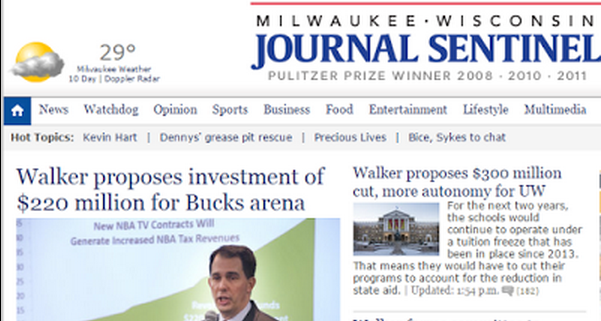 The Buck's repayment plan is pure supply side economics; give the rich money, and over time, on the hook taxpayers will get it all back and then some. Never mind the fact that the general public will pay for all of this through much higher cable bills, thank you very much:

The linchpin to Gov. Scott Walker's proposal to invest $220 million in state bonds to help build a new, multipurpose arena in downtown Milwaukee is last year's agreement between the National Basketball Association and Turner Broadcasting and the Walt Disney Co., which owns ABC and ESPN. The prospect of increased revenue gave Walker assurances that capturing the new income-tax growth from visiting NBA players, members of the Milwaukee Bucks and even the team's employees would be enough to pay the debt service on state-backed bonds ... lead to Wisconsin collecting more withholding tax if the Bucks stay and play in Milwaukee." Once the bonds are repaid, the tax growth would return to the state, Walker said.

Yes it's just more of that magical trickle down thinking. I wouldn't be so down on this had it not been for Walker's hit on UW. But even worse, the taxpayer loan of $220 million is described by Walker as, and I'm not making this up, "a free market approach."

"It's a free market approach," Walker told members of the MMAC's board of directors on Tuesday. "It's only the growth that pays for this in the future."

The eventual total cost will be between $300 - $400 million over so many years. Not a big concern for our free market loving governor and billionaire team owners on public assistance. But not everyone is happy on the right. To sum it up:


Americans for Prosperity for Wisconsin expressed disappointment: “While it appears that some protections are being put into place, the governor’s plan would put the state and taxpayers on the hook for future obligations," the group said in a statement. "Funding for sports arenas should not be the responsibility of the state and the hard-working taxpayers of Wisconsin."

According to the WKOW report below, our proud scheming governor is shown explaining how genius his plan is. It also puts us on the hook until 2046, maybe in my lifetime.