UW Funding slashed, from 48% to a breathtaking 15% in just Ten Years.

The media should really take the time to look at how quickly Scott Walker and the Republican legislature have defunded the UW. Since Walker became governor, funding dropped below 40%. Coincidence? Hardly. Shockingly, according to the Legislative Fiscal Bureau, state tax funding is now down to just 19%. I believe Walker wants to block grant the lump sum of $100 million to the UW from here on out. Keep in mind, there are a lot of numbers being tossed around right now, so it's hard to nail down just what percentage is left after the possible $300 million cut.

A friend passed along this note and chart, expressing the utter frustration she's felt watching her university attacked and possibly dismantled. It's hard to believe how much the state once paid in:


If you personally, like me, received a degree from any of the University of Wisconsin's beautiful, affordable campuses during the era when state tax support covered 50% or more of the cost of an undergraduate degree (see lower chart), and you now support Governor Walker's proposal to cut that same support to a level below 15%, you are either very confused or a selfish hypocrite. 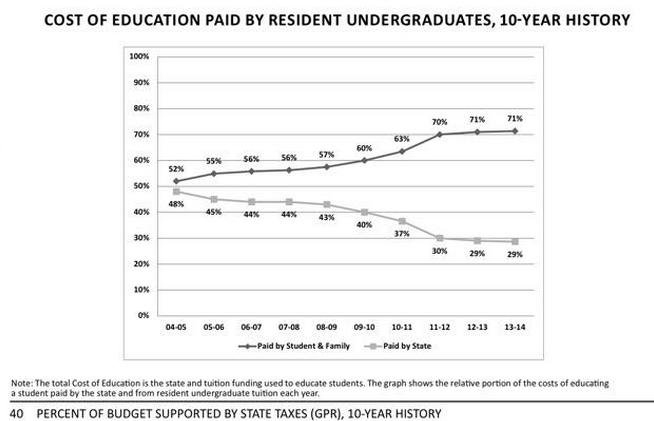 Walker continues to deflect attention away from his dramatic cuts by comparing it to former Governor Jim Doyle's heart breaking decisions during the Great Recession. For Democrats, it was a temporary sacrifice they hoped to restore at their first opportunity. But then the 2010 election happened, and Walker's been riding on the coat tails of the Obama economic recovery ever since. And even then he's still failed to bring business or jobs to the state.
Posted by John Peterson, Democurmudgeon at 1/29/2015 11:46:00 PM