Liberal's are the Enemy: From Ballot Box to Bullet Box, Tea Party Racists Scurry out from under their Rocks.

The Tea Party in Virginia, like all tea party groups, still think they can win over the American public with sweet talk like this Republican legislative candidate Catherine Crabill: 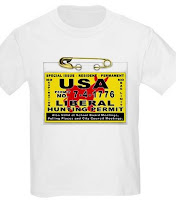 Crabill quoted Patrick Henry: "If war is inevitable, then let it come, I repeat sir, let it come." (then continued...)

Crabill: “We have the chance to fight this battle at the ballot box before we have to resort to the bullet box. But that's the beauty of our Second Amendment right. I am glad for all of us who enjoy the use of firearms for hunting, but make no mistake, it was not the intent of the Founding Fathers. Our Second Amendment right was to guard against tyranny!”

A wacky misreading of the original intent of the founding fathers on guns, and a misreading the media is reluctant to correct. That's why we have the Tea Party. Look at the teabilly.

Oh yeah, they have pictures manufactured like below as proof they're not racists, just jokesters.