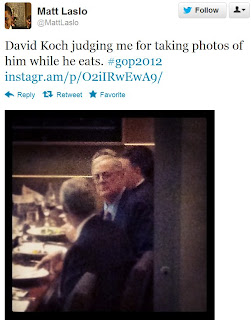 Tip of the hat to Root River Siren, for finding the story and picture below of RoJo the Clown's dinner with David Koch. The married into money millionaire Johnson is like a kid in a candy store, soaking in his senatorial fame, whoring his political influence for the adoration of the monied elite.

This picture of Johnson sitting at the left of god, offers an insight into who really really has the ear of our elected official. Oh, and don't forget to catch one of Johnson's aides listening sessions.

TPM: Romney delegate from New York, conservative billionaire David Koch, dined with Sen. Ron Johnson at a restaurant in downtown Tampa Monday night. After a freelance reporter, Matt Laslo, snapped a photo of their table, an aide to Koch approached him and asked not to give away their location to "your 'Occupy' friends."