A few things to keep in mind; the poll is more about the effectiveness’ of the negative Republican marketing campaign against it than whether people like the health care components; seniors know they’re not really effected by "Obamacare."

More importantly, it’s a gauge of how poorly Democrats stood behind one of the most important social and lifesaving changes in 50 years.

You’ll notice seniors, who really don’t have any real stake in the Affordable Care Act, fear its implementation most. The ACA does close the Medicare donut hole and provides free health checkups. 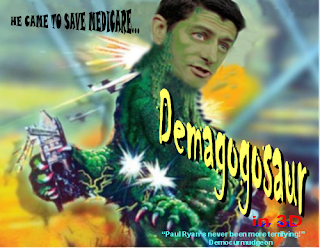 More than half — 54 percent — of those over 65 say Obamacare scares them more than Ryan’s plan, the poll from Rasmussen Reports shows. Only one in three believe the Ryan plan is more scary.

The figures show the older a person is the more likely they are to be worried by the Obama plan. For likely voters under 39, both plans scare them equally, for those between 40 and 64, Obama’s is the worse by a 47 to 41 percent margin.