Ryan's own $700 billion cuts to Medicare forced on him by Obama?

Paul Ryan’s courage, and excuses, are getting weaker and weaker. This self-avowed “leader” is now admitting he’s just a pawn in Barack Obama’s evil plan. Poor helpless Ryan had to make the cuts he didn in Medicare because Obama made him do it. I wish I were kidding: 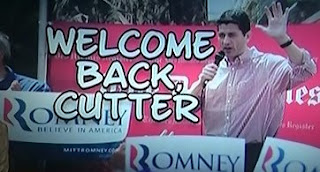 WSJ: A reporter pushed Ryan to explain an apparent contradiction during an impromptu lunch meeting in Ohio. In the interview, Ryan said he never would have included a $700 billion Medicare cut in his budget if Obama hadn't done it first.

"He put those cuts there," Ryan said of the president. "We would never have done it in the first place."