The protest went without a hitch yesterday, for those supporting the Solidarity Singers right to sing in the Capitol without a newly required permit. As reported by WKOW TV:

Maybe Chief David Erwin's marching orders to crack down on protesters, appears to conflict with the state of Wisconsin's constitutional guarantee to protest the government.


Article I, Section 4, of the Wisconsin State Constitution: “The right of the people peaceably to assemble, to consult for the common good, and to petition the government, or any department thereof, shall never be abridged.”

Are Wisconsinites getting a clearer picture of the Walker Authority's definition of "freedom and liberty?" If protecting the Second Amendment from any possible restrictions is so important, than why isn't our right to petition our government just as crucial? Yet conservative voters are okay with allowing the heavy hand of state government to prosecute targeted protesters.


jsonline: The new Capitol police chief is poised to get tough on a handful of disruptive protesters ... raising the possibility of a lawsuit from civil liberties groups. Capitol Police Chief Dave Erwin is installing panic buttons in some lawmakers' offices, changing the look of his officers' uniforms (banning facial hair) and raising some eyebrows with a suggestion to female legislative aides that they be prepared to hit demonstrators if they feel threatened and cornered. He suggested they try filming a demonstrator and, if that didn't work, punching the person with their free hand. "I said if it wasn't working you could try to hit them," Erwin said."Some of our greatest rights came from protests. I support that 100%. There's a time and a place. But every day, every day, you've got to think about that," Erwin said. "My goal is to return the Capitol to some normalcy," he said.

Is it possible the Dane County DA backed down when confronted by the Walker Authority?

Dane County District Attorney Ismael Ozanne a Democrat, said that he was informed that the Department of Justice would take the civil cases and that he would continue to handle the criminal cases with care.

Rebecca Kemble of the Nation Magazine summed it up best with this important point and picture: 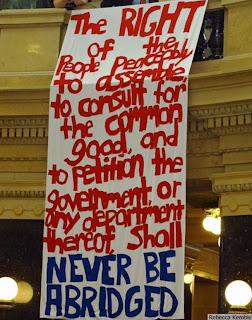 But Chief Erwin does not seem to understand that the Capitol is not a “normal” workplace and these are not “normal” political times.

According to the United States Department of the Interior, National Park Service, National Historic Landmark Nomination, this is the extraordinary nature of the Wisconsin State Capitol: “The soaring rotunda of the Wisconsin State Capitol is designed to induce its citizenry to be, as individuals, among the ‘resources of Wisconsin.’ Whereas some statehouses are maintained apart from the urban fabric, the Wisconsin Capitol Rotunda functions, both literally and symbolically, as a city center and is fully utilized as a public space to which all have claim.”