Obama has increased jobs every month since the stimulus. But that’s not good enough, or fast enough for the Republican Party.

Yet, their own lousy jobs numbers are just fine, and believe it or not, a sign their policies are working.

Hypocrite and bully, N.J. Gov. Chris Christie says the latest jump in unemployment is a good thing, and a sign of better times ahead. It’s down the rabbit hole we go: 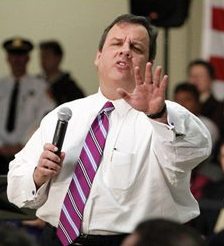 N.J. unemployment hits 9.6 percent in June, its largest jump in 3 years: New Jersey’s unemployment rate climbed to a two-year high in June, pushing the state farther above the national average … state’s jobless rate rose from 9.2 percent to 9.6 percent, its biggest month-to-month spike in three years. New Jersey hasn’t been this far above the national average in more than three decades. The nation’s unemployment rate for June was 8.2 percent. Christie blasted President Obama on Wednesday at a Washington fundraiser for presumptive Republican presidential nominee Mitt Romney, saying the president failed to deliver on his promise to keep U.S. unemployment below 8 percent.

"Under this governor, New Jersey’s unemployment rate trails our neighboring states and lags the national average by more than a full point," Greenwald said.