Ryan Campaign actually says it's Obama who needs "to explain his words."

Like the title says, the surreal all lies campaign by Romney and Ryan has yet to push the outer limits of brash stupidity. Now they think they can bait Obama to explain his words, to basically try to sell the truth, when their well framed lie is so easy to repeat and understand.

We're about to offer up a candidate for president, Mitt Romney, running on the myth they've created about the current president that stacks lie upon lie without flinching. At one time, it may have been hard enough to run on an actual record, now we have campaigns that are completely made up.


At the NPR blog, they had this explanation that trashed Lyin' Ryan's comment last night: So, what did then-candidate Obama say about the Janesville plant? It was Feb. 13, 2008, and the plant was the backdrop for his major address on economic policy. During it, he said,according to this transcript : 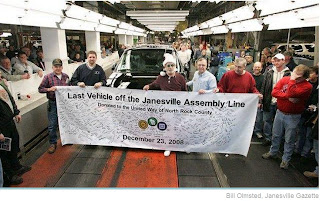 "I know that General Motors received some bad news yesterday, and I know how hard your Governor has fought to keep jobs in this plant. But I also know how much progress you've made — how many hybrids and fuel-efficient vehicles you're churning out. And I believe that if our government is there to support you, and give you the assistance you need to re-tool and make this transition, that this plant will be here for another hundred years. The question is not whether a clean energy economy is in our future, it's where it will thrive. I want it to thrive right here in the United States of America; right here in Wisconsin; and that's the future I'll fight for as your president."Note that he didn't make a clear promise that the plant wouldn't be closed if he was president, but that he would "fight" for such a future.

Which brings us to whether the plant did or did not close under Obama's watch. As we wrote earlier:


The Associated Press reported  on April 19, 2009, that "GM spokesman Christopher Lee confirmed operations at the southern Wisconsin plant will cease Thursday. About 1,200 employees were let go just before Christmas when GM ended SUV production at the plant. Some 100 workers were retained to finish an order of small- to medium-duty trucks for Isuzu Motors. Lee said most of those workers will be laid off Thursday. He said others will be kept on to help with the plant's shutdown."

PolitiFact says the plant effectively "closed while [President George W.] Bush was still in office, about a month before Obama was inaugurated."

WMTV 15 did a piece on this, with Obama's comments. I like the fact that Democratic State Senator Jon Erpenbach has been out there speaking out:


Here's where we go down the rabbit hole again:

Ryan Campaign Says It's Obama Who Needs "To Explain His Words":


"It's President Obama who needs to explain his words," Ryan spokesman Brendan Buck says in an email he just sent us. "The facts are clear: when the GM plant went on standby the president told the people of Wisconsin he would 'lead an effort to retool' it and restart production. But when the bailout's winners and losers were decided, Janesville ended up losing.