Walker primps Power Plants with Wisconsin taxpayer money before No Bid clearance sale. What a deal.

Evidently, “Walker’s wankers” in the legislature expect everybody in the state to be as dumbass backward at the silently stupid tea party deficit hawks, who still haven’t noticed their taxes being syphoned off to the energy oligarchs. 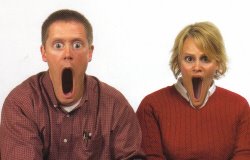 Jaw dropping stupidity
Amazingly, and according to an earlier WSJ story from February 11, “there is not yet a financial analysis to indicate how much the state might save by privatizing the plants.”
Why are we talking about this as if it were a done deal then? Let's wait for a report, anything. Gov. Scott Walker set off red flags when he decided to privatize Wisconsin's state-owned power plants by allowing no bid contracts. The sale would save the state the cost of upkeep. Guess what, Walker’s plans now include upkeep costs BEFORE THE SALE!!

WSJ: The controversial plan was the focus of another dustup this week when the State Building Commission approved spending $9 million for upkeep and improvements at the plants prior to their sale — a move slammed by Democrats.

So this has nothing to do with upkeep and improvement costs? We've seen this story before with collective bargaining.
If this whole deal never quite sounded right to you, the next comment should confirm your suspicions, and insult your intellegence:

What State Journal reporter Ron Seely failed to ask, and should have, is the logical follow-up question:


But Doyle wasn’t planning on selling the power plants, right?

Doh!!! How dumb do they think we are? The failure of media to perform the minimal amount logic and scrutiny will continue to fuel debates that waste everybody’s time...and taxpayer money.
Posted by John Peterson, Democurmudgeon at 3/19/2011 11:14:00 AM