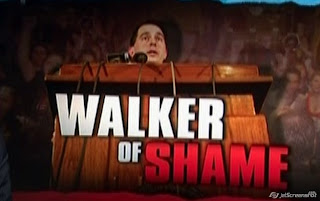 Until the count is in, we just don’t know if Gov. Scott Walker lied about whether the majority of emails he received were in support of his assault on working families and our economy or not. Here’s what we know:

WSJ: Gov. Scott Walker released to The Associated Press on Friday tens of thousands of emails he received in the days after introducing his plan to strip public workers of nearly all their collective bargaining rights.

The emails provide a first glimpse of the extent of public support … Walker told reporters he had received 8,000 emails — the bulk of which he said supported his efforts. "The majority are telling us to stay firm, to stay strong, to stand with the taxpayers," Walker said at the time … as an estimated 40,000 protesters flooded the Capitol, Walker said he received more than 19,000 emails and believed they were indicative of a "quiet majority" that backed his proposal.

An initial review by the AP of the emails found that a mass email Walker sent to state workers on Feb. 11, the day he introduced his proposal, thanking them for their service was met with a deluge of responses, many of them angry.

"Please, keep your backhanded 'thank you's and empty compliments to yourself," one person who identified himself as a state corrections worker wrote to Walker. "Actions speak louder than words, and every one of your actions speaks quite clearly to your irrational hatred of the very people that have dedicated their lives and careers to keeping the state running safely and efficiently."

Another woman who identified herself as a state prisons sergeant wrote in capital letters: "WHY ARE YOU TRYING TO TAKE WHAT WE HAVE WORKED SO HARD FOR? WE ALL HAVE FAMILIES AND HAVE CHILDREN OF OUR OWN TO FEED! TIMES ARE HARD ENOUGH WITH THE ECONOMY THE WAY IT IS!"

There was some support for Walker's plan. Other emails reviewed by the AP came from Wisconsin residents working in the private sector.