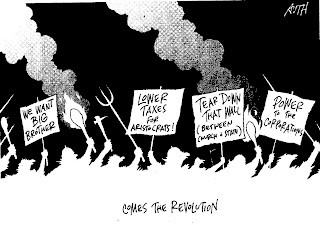 If only we could install forever the self-proclaimed constitutional ruling party of conservative authoritarians. Sigh! It would be an ideal world, with no resistance, and no elitist social middle class to look down on Republicans.
But according to the Republican Party of Dane County, there’s still a chance we can save Wisconsin, by simply relying on the “logic and principles” listed below in their press release.

The Republican Party of Dane County sent out a press release on March 29th criticizing Judge Maryann Sumi for holding up the publication of Governor Scott Walker’s collective bargaining reform bill. Upon further reflection we’d like to apologize for not understanding her point of view.
Sure, Governor Walker’s bill is unquestionably constitutional … But this isn’t about the law, is it?

The leadership of the Republican Party of Dane County have all made the choice to stand against the Dane County elite. We accept that Left feels righteous vandalizing our homes and keying our cars. It's only fair.

We disagree based upon logic and principle.

If you watch anything today, check out this Rachel Maddow analysis on authoritarian conservatives. She nails it:

Conservative author John Dean wrote this warning back in 2006:

Authoritarianism's impact on contemporary conservatism is beyond question. Because this impact is still growing and has troubling (if not actually evil) implications, I hope that social scientists will begin to write about this issue for general readers. It is long past time to bring the telling results of their empirical work into the public square and to the attention of American voters. No less than the health of our democracy may depend on this being done. We need to stop thinking we are dealing with traditional conservatives on the modern stage, and instead recognize that they've often been supplanted by authoritarians.