Have Americans suddenly been shown the value of worker rights, unions and the disrespect “job creators” have toward employees? 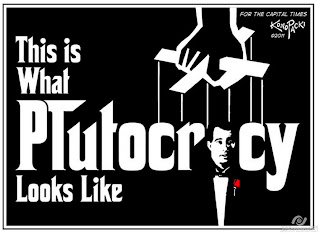 Should life really reflect the austere policies of Republican governors and legislatures? Their unhealthy worship at the alter of business over people, may have shown America the ugly side of human nature, and may have instigated the "Shock Doctrine" in reverse.
After all the protests, political vitriol and recall efforts, isn’t it telling to see this overwhelming vote for unionization?

Faculty at the University of Wisconsin-River Falls voted overwhelmingly Thursday to form a union with collective bargaining rights through AFT-Wisconsin, a statewide labor federation affiliated with the American Federation of Teachers.

The vote was 148 to 16 in favor of union representation, AFT-Wisconsin said in a news release.

(The) faculty at UW-Eau Claire, UW-Stout, UW-Superior and UW-La Crosse also have voted in favor of collective bargaining representation. Faculty on the UW-Madison campus, however, has shown little to no interest in doing so.