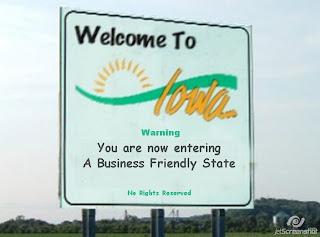 With 16 percent of Americans now out of work, the Republicans have a plan. Like tort reform, where they went after the victims of medical errors instead of reducing the 200,000 errors to begin with, Republicans would like to limit the weeks the jobless can collect unemployment instead of creating jobs.

Washington Post: Michigan moved Thursday to significantly cut its unemployment program, becoming the first of what could be a flurry of debt-laden states to reduce aid even as high jobless rates persist. The Michigan measure reduces the maximum period from 26 to 20 weeks, the lowest in the nation…

The inhumanity of such a policy is glossed over by the media, who is presenting it as an argument between ideologies. Public uncertainty is never considered an equal to business uncertainty. In fact, it’s never mentioned. And the way it’s presented here is just sad; “Critics have decried?”  “Frightfully shortsighted?”
This is employee cruelty. It creates a desperate slave labor workforce with little or no time to find a job.

Although critics have decried the benefit reductions during a time of high joblessness as part of a political “war on the unemployed,” advocates of the cutbacks say they are necessary to ease the burden on employers, who pay for the programs through a payroll tax.

A burden? It’s called unemployment insurance, paid for by the employer as part of each employees wage package. It’s not an ADDED penalty, a burden, to business. If you can’t afford it, you probably can’t afford the employee.
But this bizarre Republican preoccupation with, and surrender to, business is only getting more extreme:

Wendy Block of the Michigan Chamber of Commerce, which lobbied for the bill. “This insures that employers won’t be taxed through the roof for unemployment benefits.”

The Florida House reduced the maximum benefit period from 26 to as little as 12 weeks. The jobless rate in Florida is 11.9 percent.

State Rep. Doug Holder (R-Sarasota), the sponsor of the Florida bill said, “We are sending a message to the business community that Florida is quickly becoming the most business-friendly state in the country.”

Background: This wasn't the fault of employees, but Republican politicians cutting taxes, again.


The shortfalls can be traced to a failure during the economic boom to properly prepare for a downturn, experts said.

Unemployment benefits are funded by a payroll tax on employers, collected at a rate that is supposed to keep the funds solvent. Firms that fire lots of people are supposed to pay higher rates. Over the boom years, the drive to minimize state taxes on employers reduced revenues, and when the ranks of the unemployed grew during the crisis, the funds could not meet the need.