ALERT! Van Hollen’s DOJ on threatening email read aloud by frightened Republican in February, “did not present an imminent threat.” Now they tell us. 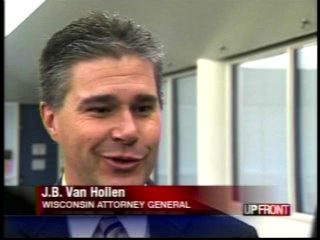 
In typical fashion, our conservative AG, J.B. Van Hollen, deflected blame for delaying the release of details relating to a death threats sent to a few frightened Republicans. Having dropped that ball, they have decided to cast blame on Dane County DA Ismael Ozanne, while finally providing the long delayed details. Republican lawmakers got the political mileage they needed out of the threats.

Cap Times: The Department of Justice is accusing District Attorney Ismael Ozanne of taking too long to bring charges against a suspect that admitted to state investigators nearly three weeks ago to having sent two of the emails containing death threats to Republican lawmakers. One of the emails reads, in part: "Because of your actions today and in the past couple of weeks, I and the group of people that are working with me have decided that we've had enough. We feel that you and your Republican dictators have to die."

Bill Cosh, a DOJ spokesman, said investigators determined the suspect, who lives in Dane County, was not an "imminent threat," but presented sufficient probable cause that criminal behavior had occurred. Nearly two weeks ago, on Friday, March 18, the DOJ referred the case to Ozanne.

We’ve been wondering why AG J.B. Van Hollen took so long to tell us, the citizen rabble, about the threatening email sent out by a woman they caught almost immediately.
Republican lawmakers have since used the threat to bash the million plus protesters at the Capitol as thugs, and raise campaign money off their victimhood. The long delay over something that wasn’t “an imminent threat” is a desperate, transparently partisan move by Van Hollen.

jsonline: DOJ spokesman Bill Cosh said in a statement that the department's Division of Criminal Investigation handled investigations of multple threats that members of the Wisconsin Legislature received beginning Feb. 21 … over Gov. Scott Walker's budget-repair bill.
DCI investigated one threat received March 9 and "concluded it did not present an imminent threat but presented sufficient probable cause that criminal behavior had occurred," Cosh said.

That's it? Who was the woman? Why did she send it? What more do we need to know about her? Nothing?
But the “Republican Victims for a Better Tomorrow” fund raising drive hasn’t come to an end just yet…

On Thursday, dozens of legislators received identical letters that made threats. Capitol Police were collecting the letters.