I've never understood why anyone gets killed in superhero movies. They always come back, which is good, but the act of having them die for whatever reason is cheap theatrics in my opinion.


Joss Whedon explains why he brought Agent Coulson back to life for S.H.I.E.L.D.

Actually, Whedon makes a joke and doesn't explain how Coulson is brought back, but it’s still good news. Agent Phil Coulson has been the thread that ties almost all the Marvel superheroes together, whether in animated form or on film.

When I watched the Blu Ray of the Avengers at home, I watched for clues in the film, and found one big one. I noticed the head of SHIELD, Nick Fury, never said Agent Coulson died. Sure he gave that impression, but that’s Fury. He has been portrayed in every movie appearance as a manipulator, and in this case, used the fake death of Coulson to bring the Avengers together. Here’s Joss Whedon’s comforting news: 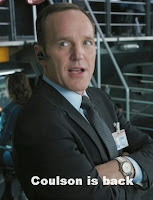 io9: We're amped that Clark Gregg will be reprising his role as Agent Phil Coulson on Joss Whedon's (pilot for TV) S.H.I.E.L.D.. But why, after the events of The Avengers, did Whedon decide to bring back a character who was busy being dead? It's because Whedon felt Gregg was the perfect guy to represent the Marvel Universe's non-superpowered heroes.

Cinema Blend reports that, at Whedon's SXSW panel, he confirmed what has been clear for some time now: Agent Coulson is very much alive in the world of S.H.I.E.L.D., which is set after The Avengers. How is it that Coulson is alive? "I'll tell you guys this," he joked, "Heimlich."