Well, saving taxpayer money and firing people sure sounded in good during the campaign. 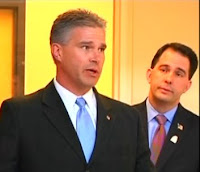 jsonline-Jason Stein: In a reversal of one of his first actions in office, state Attorney General J.B. Van Hollen is working with Gov. Scott Walker on a nearly $1 million proposal to bring back Wisconsin's solicitor general - as a political appointee. In his first campaign, Van Hollen sharply criticized his predecessor for wasting money by naming a top lawyer to oversee appeals and related issues for the state and Van Hollen did away with the solicitor general job as soon as he took office in 2007.

More spending and bigger government always looks better when it’s for Republicans. Notice that? It just keeps growing and costing more for taxpayers….

Van Hollen, a Republican, is backing a budget proposal by Walker to name not just a solicitor general but three assistants as well. It would run $961,000 over two years to create a solicitor general position, two deputies and a secretary, according to Brueck and the Legislative Fiscal Bureau. The funding also would allow for a six-figure salary for the solicitor general.

The Democratic AG didn't spend any money. Fancy that?

That's not all folks. Government cronyism under Walker is set to expand even more:

In a separate budget provision, Walker's bill would create four regional political appointees who would do public outreach and coordinate work between state agencies and officials such as the Wisconsin Economic Development Corp., lawmakers, universities and state agencies. These appointees would earn between $69,300 and $107,400 a year.