Ryan's Deadly Pursuit of Balanced Budget would Throw Most Americans off the Nations Balance Sheet.

Trying to diffuse his now infamous and roundly criticized rabid pursuit of a balanced budget, Paul Ryan contradicts his own message from sentence to sentence. He slips in and subtly suggests his unproven radical plan will simply and magically improve people’s lives, by taking away our very own misguided government.

Couched in moral platitudes, Ryan seeks cover through his Catholic faith, despite the criticism leveled at him from Bishops and Nuns. He plays on the odd paranoia conservatives have over being cheated and deprived of what they’ve earned. Losing the rewards of their hard work: 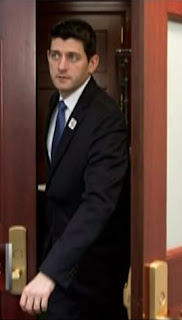 jsonline: U.S. Rep. Paul Ryan, "The crucial question isn't how we balance the budget - it's why," "The budget is a means to an end. We're not balancing the budget as an accounting exercise. We're not just trying to make the numbers add up. We are trying to improve people's lives. A debt crisis would be more than an economic event. It would be a moral failure.

You see, by cheapening our currency, government would cheat us of our just rewards. Even now, we're hurting working families. By living beyond our means, the government is sending a message. It's saying, 'If you plan ahead - if you make sacrifices for your kids, if you save, you're a sucker.' It is brazenly stealing from our children and from young adults. And it has to stop."

Have a mortgage? You’re living beyond your own means. Expanding your company on borrowed money? Ditto. Which is just the opposite of what Ryan wants to do. If Ryan took his own advice, he’d raise taxes now to pay back the bills he racked up when Republicans spent like drunken sailors during the Bush years. He wouldn’t take it out on our kids safety net programs.

Ryan is filled with misdirection plays and confused mixed comparisons. Get a load of this convoluted jumbled mess, where he mixes “community,” big government and “individualism:”

Ryan told the audience that Americans "belong to thousands of communities," that government should not displace but should support. "It isn't to blunt their differences or to flatten their character - to mash them together into some dull conformity. It's to secure our individual rights and to protect that diversity," he said.

What did he just say so well? Ryan is pushing Americans to adopt as our nations new social safety net program, services provided by faith based and volunteer organizations. That's if they decide to, and for how long.
Posted by John Peterson, Democurmudgeon at 3/15/2013 11:34:00 AM