Dumb Ron Johnson admits he doesn't intend to pay back borrowed money from the Social Security Trust Fund. Is that Criminal?

Let’s be clear, Republicans like borrowing money out of the Social Security Trust Fund. What I don’t get is this; they point blank tell Americans they aren’t going to pay it back. They even laughed at the idea of a “lock box,” remember?

How are they allowed to get away with that? Example; this back and forth between Paul Krugman and Dumb Ron Johnson. 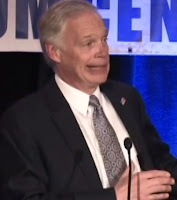 KRUGMAN:  But your facts are false.

JOHNSON:  See here’s — here’s the problem, here’s the problem with the trust fund, the federal government owns U.S. Treasury bonds, it’s the same thing as if you have $20.00, you spend it.  And by the way, that money is spent, it’s gone.  You write yourself a note for $20.00, stick it in your pocket and say, I got 20-bucks.

Yeah, so? The government borrowed money from a tax levied on the poor and middle class, money they’re putting away for retirement. It’s not a politician’s slush fund to spend and not pay back.

But to Dumb Ron Johnson, the borrowed money..."it's gone!!!" Suckers.

But the general assumption the money won’t be paid back, and that entitlement reform is a scheme to get Republicans off the hook, well, that's the plan.