Word has it that Scott Walker might change his mind about turning down the expansion of Medicaid, and instead take a different approach. There’s an interesting idea making the rounds in states dominated by Republicans. But…it doesn't save taxpayer dollars, it spends more of it.

The Big Lie Exposed: Republicans don’t care about saving money or spending less, they care more about handing taxpayer cash to the private sector, whose hand is out for more and more.

Don’t get me wrong, I don’t mind kicking around different ideas and covering more Americans, so there’s a social benefit to be gained. But saving money isn't a Republican priority. Here’s the plan: 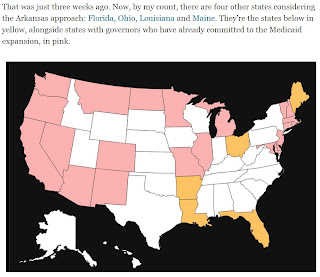 WaPo: The most interesting deal though may be coming out of a state with a Democratic governor: Arkansas. What the legislature could be sold on, they told the governor, was this: Using billions in federal Medicaid dollars to buy private health insurance coverage for the state’s lowest income populations. What Arkansas is doing is using Medicaid dollars and sending people to the private health insurance exchanges, where they will shop for a plan like millions of other Americans expected to receive subsidies.

Private companies can still make a profit from sick people, and Republicans can still represent the money changers. Yeah.

Gov. Rick Scott in Florida is also stuffing taxpayer dollars into the private health insurance sector, by taking all their Medicaid recipients, and putting them under the control of a private company that will administer the program. See, someone can make a profit from the suffering and sick.

Democratic Arkansas Gov. Mike Beebe knows it’ll cost more, but will go along with the plan as long as people get coverage. Beebe does seem a bit mystified:

There is one possible downside they might want to consider, that this approach will likely be more expensive overtime. That’s due to the fact that a private insurance plan tends to be more expensive than Medicaid. The Congressional Budget Office estimates the difference between the two, for an individual, is $3,000.

Right now, that doesn't matter for Arkansas: The federal government will pay 100 percent of the costs until 2017 … after that, the match drops to 10 percent — and then the price tag for coverage does have an effect on the Arkansas budget. “We do anticipate the potential for our state share to grow” Beebe spokesman Matt DeCample says … (He was) asked why buy the more expensive health plans, which will ultimately cost their state, and the federal government, more money.

He replied, “This is the kind of option that our legislature asked us to look for. Our primary hope is that, we can do this, and this is one way to pursue it.”