Senate Democrats give Sneak Peak at their Budget.

It's sketchy, but moderation is the name of the game. After all, if the economy does recover to pre-recession revenues, we might not have settle for all of Ryan's bad choices: 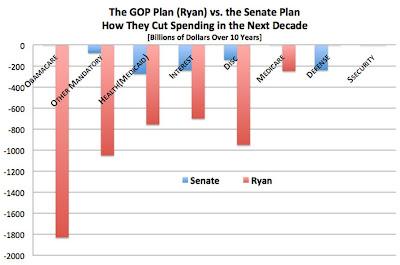 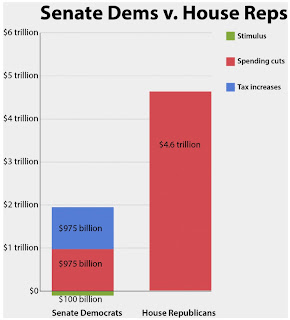 Moments after House Budget Committee Chairman Paul Ryan (R-Wis.) introduced his federal budget blueprint, Senate Democrats unveiled their own, setting the stage for painstaking negotiations between the chambers. attempt to stabilize the debt-to-GDP ratio while reducing annual deficits. In total, it will achieve $1.85 trillion in savings over a 10-year period.

(It) calls for $975 billion in additional revenues through closing loopholes and ending tax expenditures. The Murray budget does give the Finance Committee some help, though, offering parliamentary instructions (known as reconciliation) to help ensure the tax reform bill it produces will be granted an up-or-down vote.

Additionally, the budget calls for $240 billion in defense spending cuts and $242 billion in reduced interest payments. also sets aside $100 billion for economic stimulus measures -- $50 billion on repairing highest transportation priorities, $10 billion on projects of major regional importance and the rest on other items like worker training -- the total savings will be measured at $1.85 trillion.

The Senate Democratic approach does compromise more than the House Republicans' -- it's a 50/50 split of revenue increases and spending cuts as opposed to a 0/100 ratio.