While the Second Amendment is the most important guarantee, according to all conservative pocket Constitutionalist's, right wingers can still come up with reasons to take the right away.

In this amazing example of hypocrisy, authoritarianism, and another reason to never believe conservative ramblings about the Constitution, one gun store owner decided not to sell a firearm to a guy based purely on politics.

TPM: Mark Kelly's purchase of an AR-15 high-powered rifle has been canceled by the owner of a Tucson, Ariz. gun store, because the former astronaut and husband of former Rep. Gabriele Giffords (D-AZ) planned to turn the gun in to police, the Arizona Daily Star reported Monday. 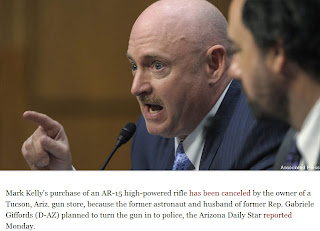 
“While I support and respect Mark Kelly’s 2nd Amendment rights to purchase, possess, and use firearms in a safe and responsible manner, his recent statements to the media made it clear that his intent in purchasing the Sig Sauer M400 5.56mm rifle from us was for reasons other then for his personal use. In light of this fact, I determined that it was in my company’s best interest to terminate this transaction prior to his returning to my store to complete the Federal From 4473 and NICS background check required of Mr. Kelly before he could take possession this firearm. A full refund was sent to Mr. Kelly, via express mail, on Thursday of last week."

Kelly purchased the rifle earlier this month, along with a pistol, to show how simple the background check process is.

Lawrence O'Donnell even covered the story, because it means that much: