Looks like Fat Cat Republicans in Waukesha County are Unhealthy.

Perhaps we'll see a thinning of the conservative herd. Those fat elitists in Waukesha, the same ones who like to turned their noses up at the hard working rabble in Milwaukee and Dane County, may just be killing themselves off from their own opulence. If Scott Walker stays in power, they’ll be dropping like flies in just a few years.


There’s a price for being an envious white collar Republican: 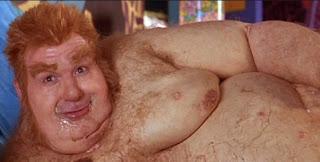 An area where Waukesha County has consistently slid is in morbidity (The quality of being unhealthful). The county was 13th overall in 2011, 22nd last year and 32nd in 2013. Notable changes in individual morbidity measurements from 2010 to 2013 include:


Percent of babies with low birthweight, up from 5.9 percent to 6.4 percent

Adults reporting fair or poor health, up from 9 percent to 10 percent

It’s not like the wealthy elite don’t have great health care nearby:


The county was ranked No. 2 for clinical care and No. 3 in social and economic factors.

It was the second consecutive year the county fell backward. It was ranked fourth in the first two years of the survey, dropped to seventh in 2012 and now is down to 13th, among 72 Wisconsin counties.