Scott Walker and the Republican majority are wasting no time, and taking no prisoners, in their quest to divide and conquer the state and make Wisconsin their own little iron fisted kingdom.

With added emphesis the last couple of years, the vilification of the word liberal was a first step. Gerrymandered districts and a complete rejection of Democratic legislation was the next step.

Now the Republican candidate running for the “non-partisan” office of Wisconsin’s schools superintendent has created a “blacklist” of “liberal” reporters he doesn't like, so he can shape the news and propaganda his way. So what's new? 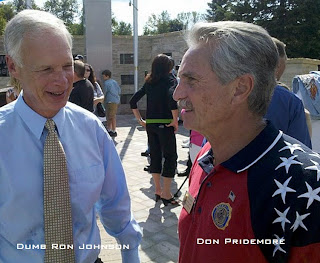 AP: A Republican running to be Wisconsin's schools superintendent has blacklisted five reporters he considers biased: It names Mary Spicuzza of the Wisconsin State Journal, David Umhoefer and Patrick Marley of the Milwaukee Journal Sentinel, Jack Craver of The Capital Times and Scott Bauer of The Associated Press. Craver provided a copy of the memo to the AP on Sunday.

An internal memo from state Rep. Don Pridemore's campaign says he will not call the five back or give phone interviews to them or their media outlets.

The memo said, "These are all LIBERAL's and have chosen to parse words, phrases and spin my responses to fit their agendas. If they continue to spin our written responses, they will be ignored in the future."

Looks like someone can't take the heat of the campaign. Is it so hard to inform the voters or answer tough questions?


The memo also said any dealings with the five and others should be tracked on a spreadsheet. It does not say what reporting, if any, landed them on the blacklist. The election is April 2.

Pridemore thinks education is a European plot to dumb down Americans. No, really.
Posted by John Peterson, Democurmudgeon at 3/17/2013 04:49:00 PM