Thanks to the Paul Ryan House, and the Senate GOP filibuster's, U.S. economic growth has been slowed enough to start blaming Obama for his "spending failure." Well, he couldn't spend.

Again, the slow recovery is Obama's fault, not the senate filibuster or the actual body of government that won't spend, and controls the purse strings, the House.

Dumb Ron Johnson tried to make that point with the chart below. If Republicans hadn't obstructed stimulus spending with filibusters, there's a good chance liberal Keynesian economic policies would have succeeded, proving supply side a failure. And the GOP couldn't take that chance. That's why dummy is out trying to reinforce the idea that Obama's to blame: 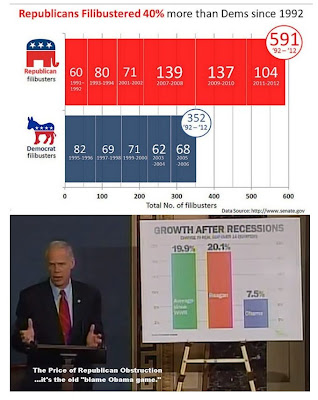