One of the biggest remaining Scott Walker campaign talking points (his now climbing unemployment numbers may become a real problem), has been the rising income levels in Wisconsin. That's a lie based on more deception, which we're finding out now is a useful tool used to buildup the GOP voter roles.

PolitiFact reveals what the news media failed to research themselves:

We rate statements that contain some element of truth but ignore critical facts that would give a different impression as Mostly False.

It's another tool for our "some element of truth" presidential wannabe Scott Walker. See Walker's current "False" and "Mostly False" ratings pictured here. 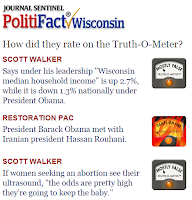 
Kleefisch said she takes issue with that reporting (on jobs) … (which) focused on Wisconsin ranking 35th nationally and 10th of 10 Midwestern states in private-sector job growth rate in ... Walker's first four-year term.


"It's based on the speed with which jobs are created in comparison to neighbors as opposed to the actual number of jobs created," she said. "So I think you're going to see the governor trying to explain that … in order for people to understand that a ranking and a rate are two separate things and help people to get why Wisconsin has fully recovered from the recession.

I wonder how that convoluted and intentional muddying of the facts works for states like Minnesota or Illinois? There's a reason why Walker is focusing in on Michigan. PolitiFact might want to check before they get too much mileage out of it.
Posted by John Peterson, Democurmudgeon at 7/28/2015 09:51:00 AM