Republicans should find the time to explain why they decided not to pursue Medicaid fraud reported by whistle-blowers. Their rabid pursuit of voter, food stamp and unemployment fraud stands in stark contrast to their stealth repeal of the Medicaid fraud whistle-blower law that helped save taxpayer money and helped pay for BadgerCare coverage. jsonline: 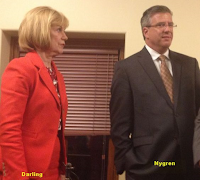 The state budget passed this week by the Legislature repeals a law that encourages whistle-blowers with evidence of Medicaid fraud to come forward. Wisconsin has recovered millions of dollars from lawsuits initiated by whistle-blowers since the law was enacted in 2007.

It just saves money and helps state taxpayers, that’s all:

Wisconsin enacted the law after the federal Deficit Reduction Act of 2005 gave states a financial incentive to reward whistle-blowers as part of the effort to fight Medicaid fraud. States that enacted laws similar to the federal law would receive an additional 10% of any money recovered. "Whose idea is this?" asked Nola Hitchcock Cross, a Milwaukee lawyer who has won multimillion-dollar settlements involving Medicare and Medicaid fraud. "It's just shortsighted and dumb. It's telling Wisconsin that we are not going to collect this money."

From rabid to who-cares is flat out bizarre. Imagine Republicans passing the buck or offering the following feeble explanation if they were dealing with the mythical problem of voter fraud. The major offenders here were Sen. Alberta Darling and Rep. John Nygren:

Nygren's office did not respond to an email on the provision in the motion. Darling's office referred questions to Sen. Leah Vukmir (R-Wauwatosa), who could not be reached Friday.

Wisconsin Attorney General Brad Schimel did not take a position (and) Anne E. Schwartz, a spokeswoman for the Department of Justice, said in an email, "Repeal of this particular law will not have much impact — if any — given that there are numerous laws that allow the state to prosecute Medicaid fraud."

Republicans have other magical ways to catch cheaters. So no big deal, right, you tightwad conservative freeloading tax cut whiners? I guessing that not every penny saved counts as much as the the money saved by cutting entitlement programs.
Posted by John Peterson, Democurmudgeon at 7/11/2015 02:41:00 PM