Inside Walker's Divide and Conquer the World Foreign Policy

Scott Walker has been tagged “authoritarian,” “dictatorial,” and “dangerous” by reporters who’ve done their research on Wisconsin’s governor. And for good reason. Walker’s vision seems to include U.S. dominance over every nation in the world. Remember when he matter-of-factly said he would “put steel in the face of our enemies.” Like his supposed "enemies" in Wisconsin, that's a list that gets longer everyday.

The idea that we’re seeing the rise of a very frightening candidate for president continues, with a piece by the Journal Sentinel’s Dan Bice. 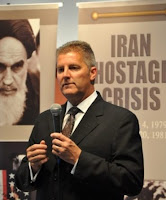 Walker introduced Kevin Hermening — a former Iranian hostage — by name, offering the former U.S. Marine a nod and a salute. (Walker) cited Hermening when opposing the nuclear deal with Iran. Walker said Hermening had taught him that Iran "is not a place we should be doing business with."

Walker’s irrational opposition to any deal with Iran, which would only accelerate their development of nukes and result in war, was shaped by Kevin Hermening’s still extreme views, which are present in every Walker foreign policy statement:

In an inflammatory opinion piece for the Milwaukee Journal Sentinel in September 2001, just weeks after the Sept. 11 terror attacks on the World Trade Center and the Pentagon … Hermening outlined a four-point plan that he described as "the only acceptable and appropriate responses" to the attacks.:

1. Hermening called for the "immediate and unequivocal deportation of every illegal alien and immigrant" … especially those with a Middle Eastern background and anyone who reacted "with glee" to the coordinated attacks by 19 al-Qaida terrorists.

2. A "prompt and massive military response that includes the destruction of the capitals of Afghanistan, Iran, Iraq, Lebanon, Libya, Sudan and Yemen." The only way out would be if these countries "agree unequivocally to support our efforts to kill Osama bin Laden. After the annihilation of each country's capitals, we can make them the same kind of financial offer we made to the leaders of Japan and Germany after World War II. Cooperate with us in the establishment of democratic governments, and we will assist you in every possible way. Don't cooperate, and your people will perpetually suffer — that ought to be our unspoken message. Every military response must be considered, including the use of nuclear warheads."

3. “The erection of security fences along the entire perimeter of the United States, with electronic and human monitoring to prevent tampering and illegal entry.”

Hermening emphasized that the op-ed piece was written during an extremely emotional period in America. But he then went on to defend most of the column … But does Hermening still think destroying these seven capitals would have been an appropriate response to Sept. 11? Yes, he does.

Walker of course has now denied Hermening had anything to do with his own policy (he speaks for himself), despite being taught by Hermening that Iran is not a place to be doing business and the glaring similarities of his attitude toward Iran:


"I'll speak for myself," Walker told the Journal Sentinel on Monday. "The reference I made to Kevin Hermening was as one of the hostages, the youngest at the time, and pointed out the things that hadn't changed. My policy is very clear and it's not aligned with what he said in that particular column." He said he does not consider Hermening an adviser to his campaign.

Many forgot the reason why Iranian students took hostages: Blowback for U.S. meddling (medical attention for the Shah) and ouster of their countries leadership.


The immediate cause of this action was President Jimmy Carter’s decision to allow Iran’s deposed Shah, a pro-Western autocrat who had been expelled from his country some months before, to come to the United States for cancer treatment. However, the hostage-taking was about more than the Shah’s medical care: it was a dramatic way for the student revolutionaries to declare a break with Iran’s past and an end to American interference in its affairs.